The store will not work correctly in the case when cookies are disabled.
Menu
Account
Be the first to review this product
$560.95
Out of stock
SKU
N51523

The Mossberg 500 SPX is a 12-gauge, pump-action shotgun with an 18.5-inch barrel and a comfortable pistol grip. With a proven Mil-Spec performance and a 6-shot capacity when used with 2.75-inch shotshells, the SPX is what you want by your bedside just in case things turn sour. The real draw, however, is the option of adding all those bells and whistles I mentioned earlier, making this a highly-customizable firearm. 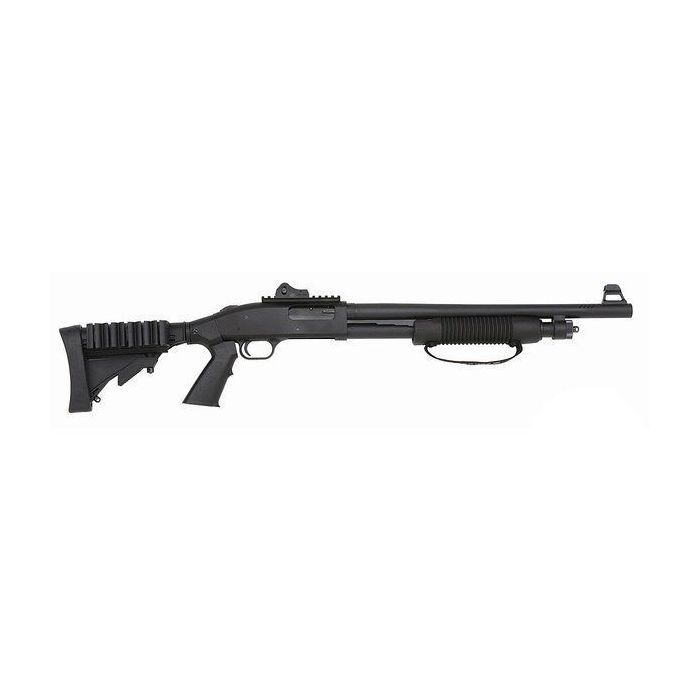 At the heart of the Mossberg 500 SPX lies the legendary Mossberg 500 receiver. With origins in the 1960s, the Mossberg 500 is a series of shotguns that represented a range of varying hammerless, pump-action shotguns, all of which feature the same receiver. Variations were generally found in the barrel length, bore size, choke options, capacity, sights and stock/forend materials. How is the Mossberg 500 SPX different? This tactical shotgun has a number of modular features that make it adaptable to just about any situation. The 500 series has always been marketed as multi-purpose shotguns designed for use in less-than-favorable conditions. As such, all Mossberg 500s feature interchangeable barrels, which provides for a number of different configurations that can quickly turn a 500 into a field gun, a slug gun, a defensive gun or a sport gun. Additionally, they are all easily disassembled to allow for easy cleaning and simple maintenance. The versatility of the line has even earned it a spot with military forces the world over.

The Mossberg 500 SPX is a 12-gauge, pump-action shotgun with a 3-inch chamber. The magazine tube has a 6-shot capacity when using 2.75-inch shotshells. If you cannot get the job done with 6-shots, you probably have no business handling a firearm. The shotgun also features an 18.5-inch ported barrel, which aids in the minimization of muzzle rise, and an overall length of 38.5 inches. Easily manageable, the SPX weighs in at just 6.75 pounds. Finally, the shotgun also includes an ambidextrous thumb safety. I think that about does it.

Oh yeah, there are also some other cool features, like the inclusion of a MIL-STD 1913 rail on the receiver for the attachment of the optics and other tactical gear. Or, you could leave the shotgun as it is with the ghost ring rear sight and the M16-style fiber optic front sight, both of which provide for incredibly fast acquisition of targets whether your battleground is lit up or in the shadows. There is also the 6-position adjustable stock that gives you the option of a length of pull between 10.75 inches and 14.625 inches.

The search for your next firearm is over. Best of all, you can get a shotgun suitable for home defense and recreational shooting in one great package with the Mossberg 500 SPX. It is great for any of the following: