The Mossberg 590A1 LE is a 12-gauge, pump-action shotgun with a 20-inch heavy barrel and a MIL-SPEC performance to back it up. Its three-inch chamber provides for a nine-shell capacity, but the real draw –aside from its proven military performance – is the inclusion of an aluminum trigger guard and button safety, which are joined by a wealth of other practical features like the synthetic SpeedFeed® stock that makes carrying a surplus of shotshells a non-issue. Folks, this is one shotgun that you are not going to want to miss. 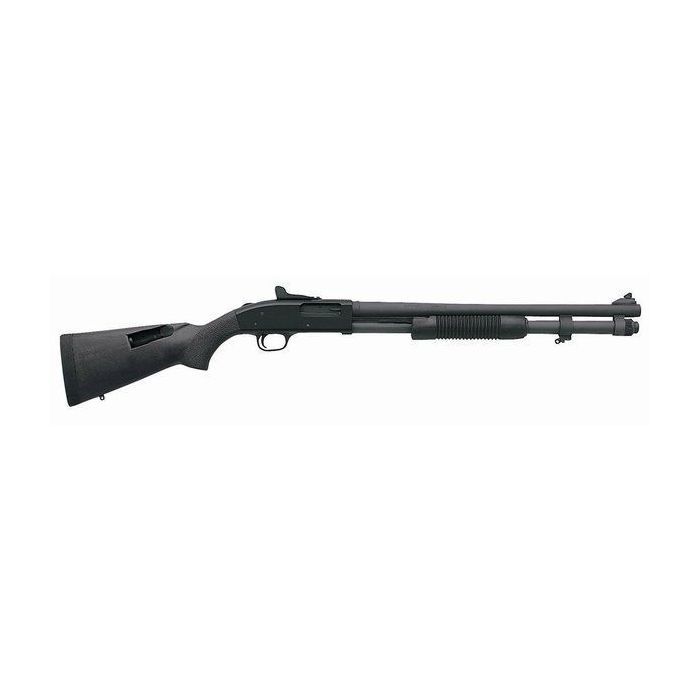 As one may guess based on its name, the Mossberg 590A1 LE is a shotgun that traces its lineage all the way back to 1961 when the Mossberg 500 series made its debut. The Mossberg 500 series is a series of shotguns that represents a range of varying hammerless, pump-action shotguns, all of which feature the same receiver. Variations were generally found in the barrel length, bore size, choke options, capacity, sights and stock/fore-end materials. The 500 series has always been marketed as multi-purpose shotguns designed for use in less-than-favorable conditions. As such, all Mossberg 500s feature interchangeable barrels, which provides for a number of different configurations that can quickly turn a 500 into a field gun, a slug gun, a defensive gun or a sport gun. Additionally, they are all easily disassembled to allow for easy cleaning and simple maintenance. The versatility of the line has even earned it a spot with military forces the world over – often as the Model 590A1, which typically features an aluminum trigger guard and safety as well as a heavily-walled barrel.

As noted, the Mossberg 590A1 LE is a 12-gauge, pump-action shotgun with a 20-inch, heavily-walled barrel alongside an overall length of 41 inches. The magazine tube provides a nine-shell capacity for an overall capacity of 10 with one shell in the chamber. If you want to get technical – and I know that you do – the 590A1 LE is actually capable of carrying 12 shells in total. This, of course, takes the synthetic SpeedFeed® stock into account, which stores two additional shells and joins the aircraft-grade aluminum construction of the receiver to provide for a light weight of just 7 1/4 pounds. Other features include an aluminum trigger guard and ambidextrous thumb safety, ghost ring sights and a parkerized finish for enhanced protection against rust and corrosion.

The Mossberg 590A1 LE is an excellent choice for: