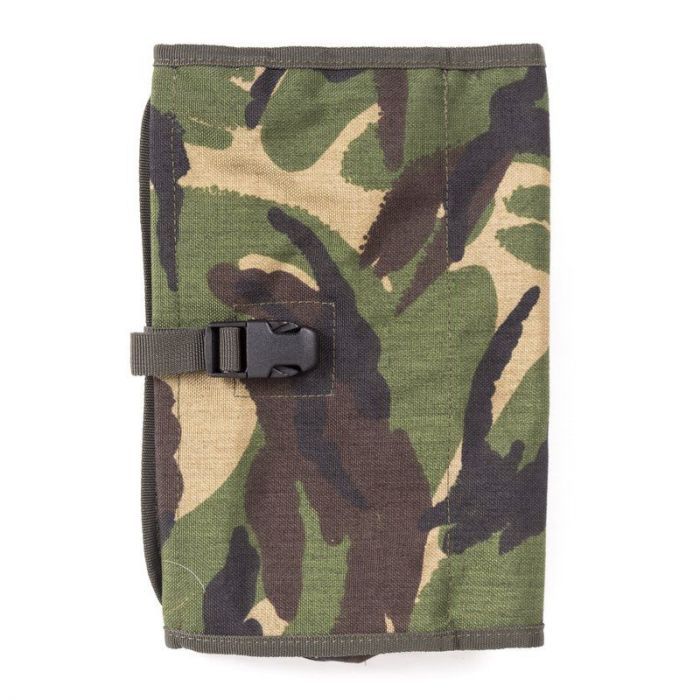 You may not find that your favorite PDA or tablet fits exactly into this carrier, but it can be adapted to hold almost anything. The construction of the carrier used high strength nylon with extra padding sewn into the flap cover. Purchasing a new case made with this level of standards would cost considerably more, and wouldn't feature the distinctive British Woodland DPM camouflage pattern.

Overall Rating
unique and perhaps usefull item
Review by james 2/25/17
I am pretty sure this is a case for a component of the BOWMAN field communications system used by UK forces. Apparently not as popular as it's predecessor the CLANSMAN system, the acronym was twisted by the troops to stand for "Better Off With Map And Nokia"

So this case is a dedicated item designed to hold a specific piece of equipment, one of the 4 sides of the compartment is open, I assume, to allow passage of cables, point being, just realize it's not a universal PDA tablet caddy.

After getting mine I decided to gut it and rework it to hold my bluetooth keyboard, tablet phone, and wi-fi hot-spot.( My own little portable field communications system.)

With a bit of surgery and some stitching, I will have a unique and useful equipment caddy.
Overall Rating
GREAT FOR MAPS
Review by Lucas 2/9/17
hold my hikinh maps and pens it it. I also fit a survival kit in there, great buy
Overall Rating
Very handy item for your notebook computer.
Review by Jeffrey 3/7/16
I'm so glad I picked one of these up for my notebook computer. It not only protects it during storage and transport, but also gives you a stable use platform and the side shields give privacy and blocks the sun. Very well made.
Overall Rating
Goal Zero Solar Panel Protection Device
Review by Paul 11/13/15
Bought this just because it looked cool, so I get this thing thinking,What can I use this for ? Tried my tablet,not good for mine so I picked up my Goal Zero panel and wow,perfect fit, My panel was already in a waterproof bag, had an anti static bag, sealed that up and stuck the whole package in this terminal carrier. Holds it nice and helps protect it from damage and looks really cool at the same time. For the money I'm sure you can find a use too. Like maybe a battery backup for your electronic devices and an assortment of cables. My next one. I really like that British camo. Thanks KS