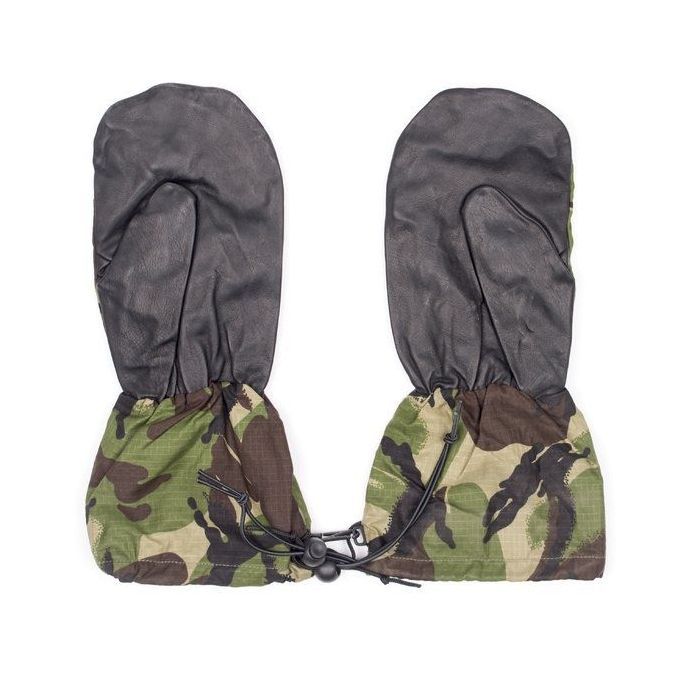 The British Army Mittens are a pair of "near new" military surplus mittens from the British Army. These mittens would be issued to soldiers in the British Royal Marines who are stationed in Norway to defend Europe from a Russian Arctic invasion. Often worn with an additional liner and an outer mitten, these mittens by themselves are sufficient to keep your hands warm in the coldest climates of North America.

The British Army Mittens are serving on the front lines of Europe. Worn by British Royal Marines in extreme cold weather environments, these mittens are designed to keep the cold out and the warmth in. Featuring the world recognized British Woodland DPM pattern camouflage along with leather lined palms, you'll find your grip is firm and your hands warm while wearing these excellent mittens.

Officially known as "Mittens, Inner, Extreme Cold Weather" in the British Army, we like to refer to these as simply British Army mittens. We have tested them in the cold weather of Pennsylvania and found them to be better than any commercial grade mitten. Each mitten has an elastic area that falls just below your wrist to keep the cold and wind out of the mittens along with a rip-stop material that extends another six inches. This extra six inches provides for coverage of your forearms and there is a draw string closure system to keep this additional area snug against your arm.

Overall Rating
Now have complete set
Review by Joe 9/26/18
Got my mittens last year, and just recieved my outer wateproof layer. Size large mitts and outers fit great inside each other and now to bring on the wet & cold.