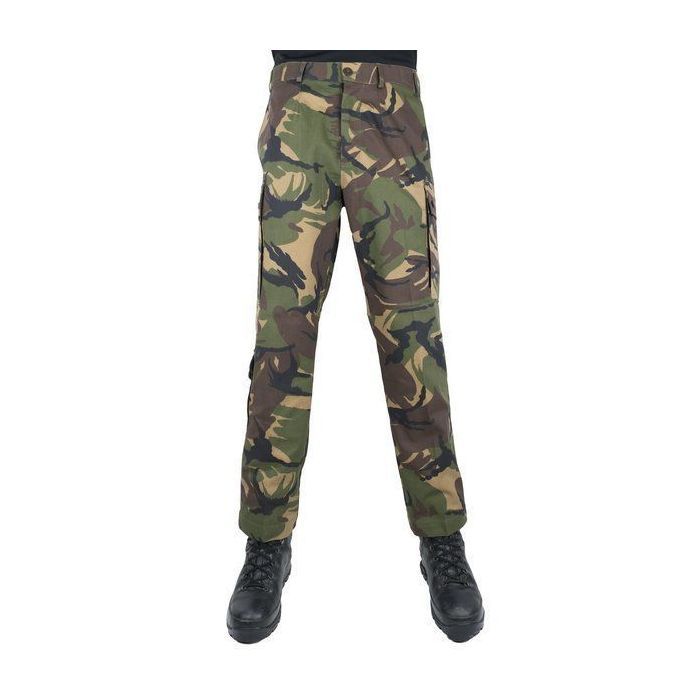 The Dutch Army Woodland DPM Combat Pants are an authentic pair of combat pants from the Royal Netherlands Army. These combat pants were designed to equip Dutch soldiers with a tough pair of pants for both combat and non-combat environments. What makes these pants better than most military combat pants are the six pockets, which have been put in strategic locations to allow maximum carry capacity with comfort.

The Royal Netherlands Army which is commonly refered to as the Dutch Army has been in existence since 1814, with the Netherlands being a founding member of NATO in 1949. With this long history and close association with NATO, many Dutch military items have been influenced or licensed from other NATO members. One look at these combat pants and you can see that the Dutch Army licensed British Woodland DPM camouflage for their soldiers.

While the use of woodland DPM camouflage may imply these combat pants are copied from the British, that would be far from correct. The Dutch looked at the needs of their soldiers and incorporated them with the design of these pants. One of the most important features they took with these combat pants was to incorporate a total of six pockets, with the pocket layout being unlike any other combat pants. This was done to ensure a soldier had plenty of cargo space in their combat pants and that carrying volume was spread out along the length and width of the pants.

Overall Rating
Best Camo Available
Review by The Shaitan 10/22/19
Shy of Rhodesian Brushstroke, This is the best camo still available, buy it while it’s still around
Overall Rating
Nice pants.
Review by The FAL guy 3/22/19
Good quality and I like the DPM pattern.