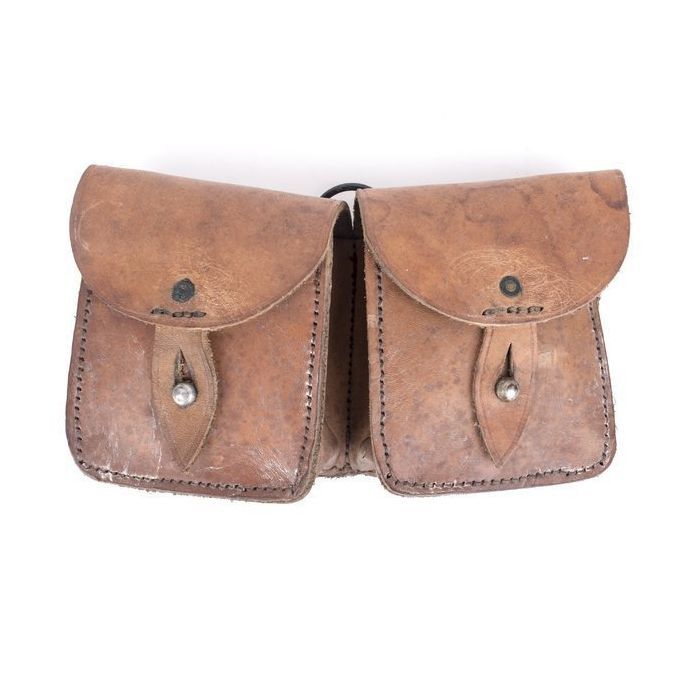 The MAS-49/56 magazine pouch is an authentic French military surplus item designed to hold two 10-round magazines for the rifle of the same name. Sporting dual belt loops, this is the pouch you want if you own the MAS-49 or MAS-49/56.

The dual belt loops and the D-ring on the reverse make this pouch easily attachable to both belts and slings, making transport simple. With flaps featuring button closure, these pouches are tough and sure to last. Additionally, the underside of each flap is stamped with “CLERMONT-Fd” to signify the manufacturer’s location – Clermont-Ferrand. It’s details such as these that make owning military surplus items extra cool.

Originally adopted by the French army in 1949, the MAS-49 is a semi-automatic firearm developed to replace the outdated bolt-action rifles that were in service at the time. It was designed and manufactured by Manufacture d'armes de Saint-Étienne (MAS), a state-owned arms manufacturer. Utilizing a direct impingement gas system, the MAS-49 fires the 7.5x54 mm French cartridge.

In 1957, a variant of the MAS-49 was developed that was mass-produced and saw service through 1990. It was the MAS-49/56. The MAS-49/56 was lighter and featured both a shortened barrel as well as bayonet. Additionally, the built-in grenade launcher was replaced by a combination rifle grenade launcher/compensator.

Overall Rating
Good Leather
Review by SomeGuy 5/25/21
Like other reviewers mentioned- good quality leather that needed some care and cleaning. Bit of storage stink- hoping a few days outside will help clear that out. Using it to store some 22LR ammo- able to store 2 50 round boxes of CCI with the plastic dividers for each round or 3 boxes of 50 round Win-X (loose packaging).
Overall Rating
Can be brought back...
Review by P 3/4/21
...from the flattened condition it arrived in. These have been stored a minimum of 30 years, and it looks like they were stored flat in bulk the whole time. The leather quality is fantastic, but condition is another story. Mine responded to saddle soap and multiple treatments with Bick 14 (saddle leather preservative - way better than any oil). The photos show about the color and random staining to expect. The stiffness initially was amazing, but htese are 8 to 10 oz. leather - very heavy duty. Downside was a bit of dry rot - both the closing tabs came right off at the first try. Had ro cut new ones and attach them myself.
Overall Rating
Mine looked nice but....
Review by Flag2442 11/22/17
The back and flaps were in fine shape. One of the belt loops appeared rotten and tore off and the same with one of pocket bottoms. Tore like wet cardboard.....
Overall Rating
A Real Beauty
Review by Tracey 9/9/17
...the smaller pouches arrived sealed in plastic, "new surplus". The leather is dry, but I saw no dry rot. They need oiling, and I also used neats foot oil. It took several applications of oil, and I let them rest in between coats. So far, I've applied oil about 5 times, but might add a few more coats, but they are "beautiful" They smell like a saddle, and the leather is becoming very limber. I wanted the pouches to hold my 380 shells on my belt, and they're perfect. A= to the French.
Overall Rating
Good stuff
Review by Dave 4/7/17
In fine shape. A bit of saddle soap & neats foot oil, good to go!
Overall Rating
Quality, utility pouch
Review by Greg 6/18/16
I bought a pair of these, complete with a tad of mil-surp smell. The two I received were quite stiff out of the packaging. I folded the flaps down and left them closed for 3 weeks and they will stay about half-way open un-fastened now. I bit more working of the leather ought to fix that. Great for what they are.
Overall Rating
The real deal !
Review by steve 3/11/14
Like new ammo pouches..cleaned them up buff then out.
now they look near new..Great price...
Overall Rating
Great utility pouches
Review by Stephen 12/1/11
These are heavily stitched to last. my youngest uses a pair to hold slingshot ammo. I added a pair to my tool belt to hold odd tools and parts. They're great for costumes too.
Overall Rating
Great quality, extremely satisfied
Review by Benjamin 4/13/11
This was my first order and won't be my last. I am happy to find a place where the items are as described.