The store will not work correctly in the case when cookies are disabled.
Menu
Account
Be the first to review this product
$51.95
In stock
SKU
KGB-PS

What do a great white shark and the KGB have in common? Aside from the fact that I would strongly prefer not to cross either, they probably have little in common. With a great white shark, I am completely out of my element. Sure, I can swim; but not nearly as well as a creature that calls the ocean its home. And I would rather not rely on the tired idea that punching it in the snout will send it crying for its momma. After all, a shark's vicious teeth are quite close to its snout. As for the KGB, I think the reasons are pretty obvious.

The KGB was the national security agency of the Soviet Union from 1954 to 1991. It was responsible for internal security and intelligence, among other things, while operating as a secret police organization. And it was not above going outside the law to accomplish its tasks. Unsurprisingly, the KGB dispersed a great deal of propaganda to further their agenda. Now, you can own some of the most famous KGB propaganda posters from the mid-20th century with Keepshooting.com's new KGB propaganda poster set.

This set of 24 prints is a collection of some of the KGB's most powerful propaganda campaigns. Designed to raise awareness, quell dissenters and instill general fear and paranoia, the prints found within the KGB propaganda poster set are sure to find a home with anyone that has an affinity for Soviet history.

Keep a tight set of lips and remain ever vigilant for the betterment of the Motherland with the KGB propaganda poster set – available now for $49.95. 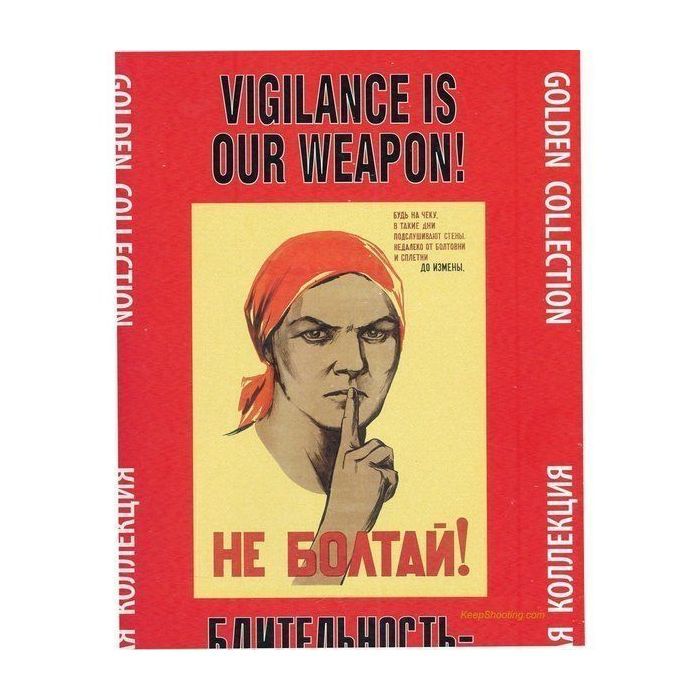 KGB is an acronym for Komitet gosudarstvennoy bezopasnosti, or "Committee for State Security." As noted, the KGB was the national security agency of the Soviet Union from 1954 to 1991, when it was dissolved alongside a thwarted attempt to depose Mikhail Gorbachev. Much of the KGB archives remain highly classified. It is common knowledge, however, that both legal and illegal means were used to achieve their ends, which included the employment of resident spies, theft, kidnapping and assassination, among others. The KGB also played a big role in suppressing internal dissent, which was also achieved through both legal and illegal means.

In the eyes of the KGB, suppressing internal dissent required the use of propaganda. The idea of foreign spies lurking around every corner inspired slogans that sought to ensure citizens remain tight-lipped and aware of their surroundings. After all, chatter and gossip help the enemy. Of course, the less people said – about the KGB or otherwise – the less the entity had to worry about their illegal actions coming to an end. The KGB propaganda poster set represents a collection of 24 different prints that were created and distributed in the early days of the KGB, each of which was designed to raise awareness of the enemy, quash internal dissention and instill fear in the population. Each print measures 13 inches by 9.5 inches and is presented in full color.

The prints are presented in their original design, which means they are written in Cyrillic rather than English. They are all housed in a folder that includes a translation of each print, making their purpose very evident. My favorite is the depiction of a Nazi wolf in sheep clothing with the phrase, "The enemy is cunning – be on guard!"