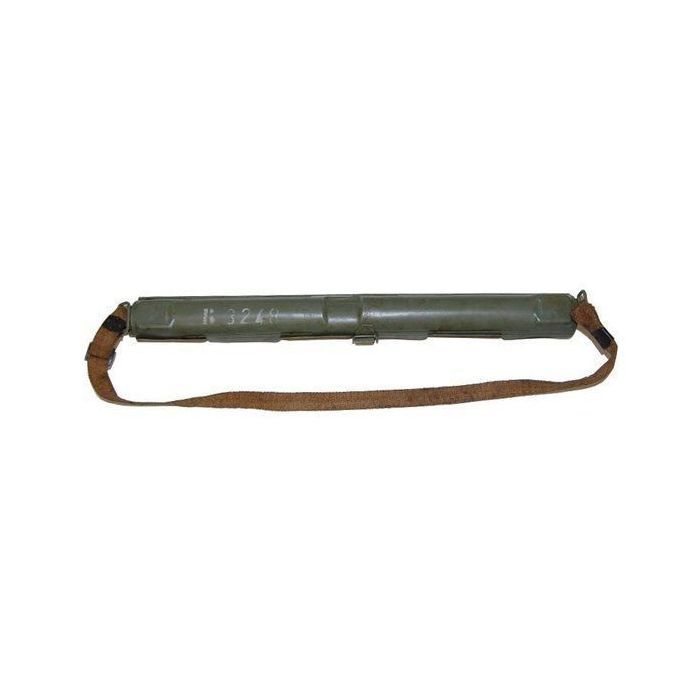 We here at Keepshooting.com like to believe that we serve a customer base that is both resourceful and innovative, one with the ability to think outside the box and conform to other trendy idioms and buzzwords. When life hands you lemons, you don’t make lemonade. You pull a “MacGyver,” and instead use them to solve complex global problems.

The MG42 spare barrel carriers are authentic, used German military surplus. Each carrier features a full steel construction and is in serviceable condition. A hinge runs across the entire 23-inch length of the olive drab carrier, which allows it to be opened lengthwise for complete and easy access to the interior. The interior also features a secondary hinge that allows the carrier to be locked in the open position, as well as a groove to secure a barrel. When not in use, the carrier is locked closed with a simple metal latch that features several proof marks. Finally, there is the tightly woven, adjustable sling that makes transport a breeze.

As mentioned, the MG42 spare barrel carriers were originally designed to house barrels for the machine gun bearing the same name. A general-purpose machine gun adopted by Germany in 1942, the MG42 is most notable for its extremely high rate of fire – capable of producing 1200-1500 rounds per minute. As you can imagine, this high rate of fire leaves the barrels very susceptible to overheating and wear. You can also imagine how invaluable spare barrels became, and by association, spare barrel carriers.

Well, if you haven’t noticed, WWII has been over for more than 65 years and I don’t imagine you will be carrying any MG42 barrels around. You can, however, still find practical uses for the carrier. Aside from being a wonderful WWII era collectible, the MG42 spare barrel carrier is an ideal choice for:

- Painters – the steel construction is easily cleaned and makes a great case for brushes, paints and other supplies

- Shooters – use the carrier as a cleaning kit to house rods, brushes, patches, solvents and oils

- Collectors – the carrier is a fine addition to any collection

Still not sold? Employ some of that creativity I know you’ve got and come up with a reason to buy one!

The MG42 is a 7.9 mm general-purpose machine gun developed in 1942 for Nazi Germany’s Wehrmacht. Generally, it was used to supplement its predecessor – the MG34 – but in some cases served as a replacement. Ideally, the machine gun was operated by a six-man crew: the gun commander, a soldier designated to carry and fire the gun, one for the tripod and three more to carry ammunition, spare barrels and other accessories.

Overall Rating
OK for re-enactor
Review by Dave 1/11/21
The MG-42 barrel carrier is in good shape, has been repainted on the outside. It has proofs on the latch as stated, but I did not find any codes, dates or waffenamts, so I believe it to be postwar. It is not painted a dark green like most WW2 german equipment is.
Overall Rating
Great working condition!
Review by Michael 11/9/16
Best price I've found and includes strap! Geat for German WW2 reinactors!