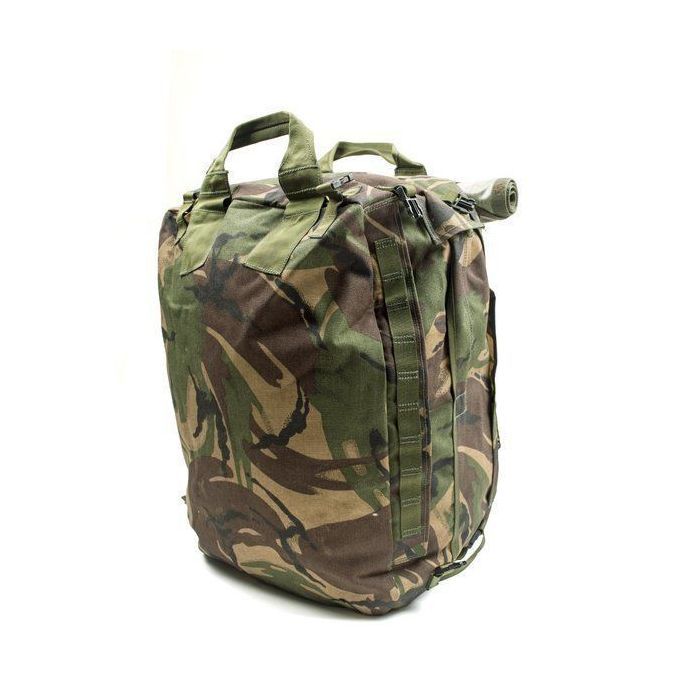 The British Army Other Arms Rucksack is an authentic rucksack from the British Army. With a medium size design this rucksack is ideal for everyday carry or an overnight trip where you want to bring your essentials. This rucksack features a uniquely British design and is rarely seen outside of the United Kingdom.

The British Army Other Arms Rucksack is one of the most rare rucksacks in the British Army. Out of thousands of rucksacks, backpacks, and hold-alls we have imported from the United Kingdom we have only had 36 of these offered to us. Designed as a specialized rucksack to carry support gear for battlefield weapons aka "other arms" you likely won't see this rucksack ever again once we are gone.

Far from just being a unique and rare rucksack this pack is full featured. The main cargo compartment is large and has two separated areas for better organization of your gear inside the rucksack. There is padding on the shoulder straps and the lower back area of the rucksack to allow for more comfortable carry when the pack is loaded to full capacity. Lastly this rucksack can be worn like a backpack or carried like a handbag. There is a roll down velcro sealed cover that can hide the shoulder straps for hand carry when required.

Overall Rating
Good pack but...
Review by Mike G 9/13/19
I have had several of these over the years and they are great. This one was in very good condition. The problem with this particular bag is the fact that KS did not ship it with the frame. They failed to mention that, so I had to get creative so that it would be useful. Just be aware of this when purchasing.
Overall Rating
Expands and contracts
Review by Cary 4/26/17
Mine started out like new. Upon closer inspection there was a missing buckle and some very minor wear which brought it down to very good. The colors were still bright almost like new. Medium large, not carry all of your kit kind of large but an assault pack would fit inside kind of large. Has side panels that will zip together for smaller loads to keep things tight or will allow the bag to expand when needed to fill it up. Has a panel that rolls down to cover the shoulder straps and is held in place with Velcro. That gives the front and back a smooth surface if you don't want to deal with the straps. Heavy duty construction with 2 large handles on top. Good padded shoulder straps and waist belt, padded back with aluminum removable internal frame inside a pocket inside another pocked. The frame can be removed or bent to contour if needed. Interesting heavy duty one compartment bag.
Overall Rating
worth the money
Review by Jeff 4/18/17
I really do not need another rucksack, but when I saw this, it was too good to pass up. The camo pattern looks a bit faded, but more importantly it is in very good condition. Nothing frayed or used hard. I would concur that it is bombproof. I'm very pleased with my new ruck. If you are thinking about getting one, order now, before they are gone.
Overall Rating
Huge!
Review by Steve 4/12/17
This pack is very large. I actually use it for extended vacation trips, it holds all my clothes and most other gear I need. Bye bye suitcase. It is bombproof, very heavy duty materials, zippers, and easy to pick out at the airport carousel. You will never wear this bag out, a good deal for large loads.