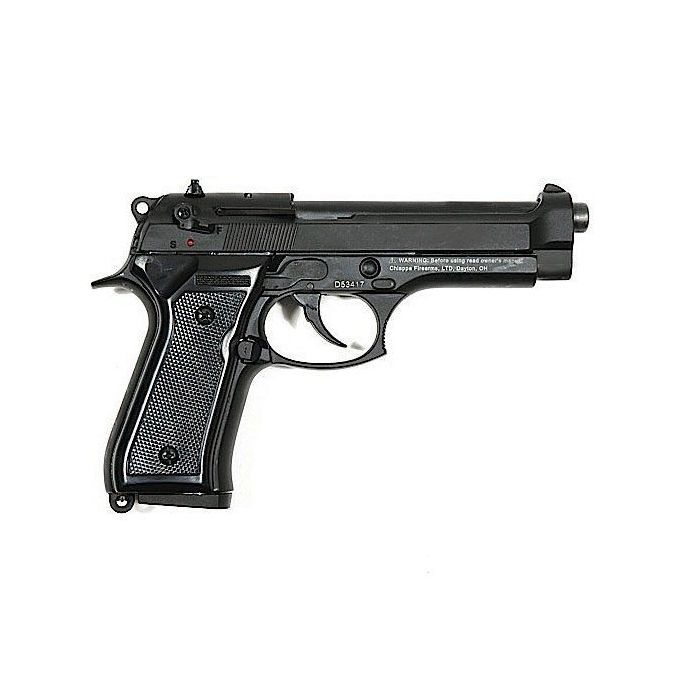 5 1 (1)
The Chiappa M9-22 is a replica of the Beretta M9 that reproduces faithfully each of the components characteristic of the official sidearm of the U.S. Military. The major difference, however, is that the Chiappa M9-22 is chambered for the .22 LR cartridge. As such, it is great for use as a training platform, considering the inexpensive initial cost of the pistol and the inexpensive costs associated with .22 LR ammunition.

Originally founded by Ezechiele Chiappa as Armi Sport in 1958, Chiappa Firearms is an Italian-owned and operated arms manufacturer based in Brescia, Italy. Bringing a wealth of knowledge from his work with a manufacturer in Valtrompia, Chiappa's natural technical abilities gave him the skills necessary to form his own company, a company that would produce only one pistol for its first four years before growing into the respected industrial corporation that it is today.

As noted the Chiappa M9-22 is a replica of the Beretta M9 that is chambered for the .22 LR cartridge rather than the 9x19mm Parabellum cartridge. Recently, these replicas have become more and more prevalent as their market continues to grow. Whether people are unable or unwilling to spend the steep initial investments that these replicas' counterparts beg, or they just prefer to train on a platform that will allow them to train at a much higher volume, they are turning to .22 LR replicas more often than not. Chiappa Firearms seems to have noticed this trend and responded with several .22 LR replicas in kind.

The Chiappa M9-22 features a five-inch barrel (1:16 inch twist) alongside an overall length of approximately 8 1/2 inches – dimensions that are almost identical to the actual Beretta M9. Though several models of the Chiappa M9-22 exist, the model for sale today is the Standard model. As such, its black alloy frame is joined by black synthetic grips that combine to give the pistol an overall weight of approximately 2.3 pounds. Moreover, it includes a fixed front sight with a windage-adjustable rear sight as well as an ambidextrous thumb safety that doubles as a decocker. Each Chiappa M9-22 ships with a single 10-round magazine.

The Chiappa M9-22 is just another in a long lineup of fine Chiappa firearms. Consider this pistol for:

Overall Rating
Great stand in for your M9
Review by Jose USMCR 3/4/13
Verified Buyer
If you are issued an M9 this is a great way to get some trigger time and not bust the bank. If you are like me your having a hell of a time finding any ammo but you have found some .22s Super gun if you want to own a pistol like the one you carried in the Middle East but you don't want to spend $600 +