I am a big fan of the crime drama genre. Whether it is a movie, television show, books or comic books, you just cannot beat their hardboiled, gritty nature. There is just something so irresistible about a story that centers on a crooked cop, a femme fatale, a heist or even all of them combined. Now, I am no proponent of crime, but if it makes for a good noir tale, then go right ahead and lie, cheat, steal, seduce, blackmail, shoot and break whatever other laws it takes. Just kidding. In essence, all of the aforementioned traits combine beautifully to create a one-of-a-kind atmosphere. A good story will allow you to smell the blood and cigarette smoke. It is what makes certain “Batman” and “Detective Comics” comic books so great.

But that is not the only thing that makes Batman great. It is also the mystery and secrecy. What is cooler than a billionaire playboy that secretly fights crime? Well, the Batcave for one. Bruce Wayne built a secret headquarters beneath Wayne Manor, complete with hidden tunnels and passages that connect the Batcave, Wayne Manor and the outside world. It seems that popular culture and media have always been fascinated with hidden passages and tunnels, as well as hidden wall safes and other secret rooms. Being secretive is cool. My life will not be complete until I have a bookcase that moves aside to reveal a hidden room with the careful removal of one specific book. Since I am sure that will not be happening any time soon, I will have to go with something else – like Keepshooting.com’s new concealment clock.

The concealment clock is the next best thing to a hidden wall clock, secret rooms, passages and tunnels. What appears to be an ordinary clock is really a secret stash, perfect for concealing handguns, money and other valuables. Ordinarily, you would lock your firearms in a safe. However, this clock allows you to have one hidden, always ready to protect you.

The concealment clock will not turn many heads, but you have the satisfaction of knowing you are one step closer to being Batman. 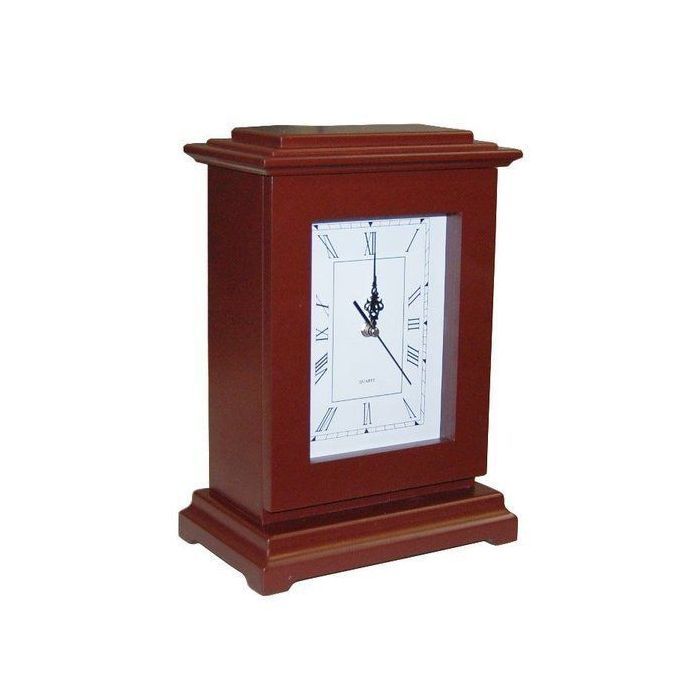 The concealment clock is not only a great place to stash your valuables. It is also a fully functional clock. But before we get to all of its highly-desirable features, I will cover the basics. The clock has dimensions that measure approximately 13.5 inches tall, 9.5 inches wide and 6.5 inches deep. It also features a solid wood construction with a rich mahogany finish. It may not be the most expensive clock on the block, but it sure does look the part.

As for its time telling functionality, the concealment clock provides precise timekeeping with its quartz movement. It works using an electronic oscillator that is regulated by a quartz crystal. Together, the electronic oscillator and the quartz crystal (crystal oscillator) create an electronic signal with an extremely precise frequency. What does all that mean? It means this clock keeps time pretty well. Well enough that you could purchase it solely for its timekeeping abilities, ignoring its primary function. The clock functions with one AA battery, which is included for your convenience.

Speaking of its primary function, it is about time I told you about the storage area in the concealment clock. The front panel of the clock is on a metal hinge that allows it to easily fold outward, revealing a sizable interior storage area. The storage area measures approximately 11 inches tall, 7.5 inches wide and 3.5 inches deep. To conceal the storage area, simply fold the panel back upwards and secure it using the magnetic latch.

The concealment clock is an excellent choice for a number of different reasons. The obvious application is as a handgun storage box. You cannot leave handguns out in the open for safety reasons, yet you are weary of keeping them all locked away in a safe. After all, you want easy access in the case of an emergency. This clock provides a great place to keep handguns out of sight but easily accessible. The concealment clock is perfect for storing: