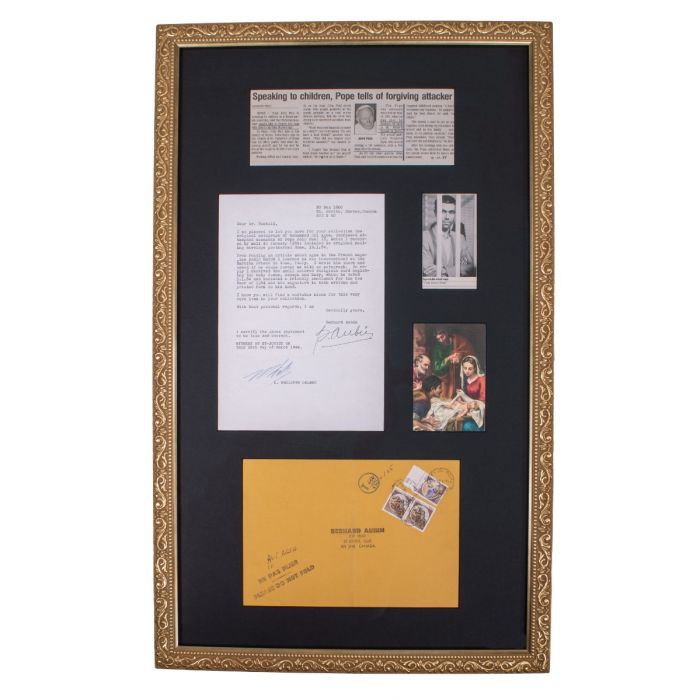 On May 13 1981 at 5:17pm the world was shocked by the attempted assassination of Pope John Paul II in St. Peter's Square in Vatican City. This one of a kind grouping ties together the events that were rapidly developing in Europe when this attempted assassination happened, combined with the Three Secrets of Fatima, the date of this attempted assaassination, and the elevation of John Paul II to Sainthood make this a once-in-a-lifetime purchase. You can own this "only one in the world" grouping where you can proudly display it in your private collection -- rather than see it purchased by a museum or acquired by the Vatican.

On May 13, 1981 at 5:17pm the Pope entered St. Peter's Square in Vatican City arriving in the open air Fiat Popemobile where Turkish Grey Wolf member Mehmet Ali Agca was waiting to assassinate him. Agca drew his Browning Hi-Power and fired four shots, all of which struck Pope John Paul II. Two of the bullets lodged in his lower intestine, while the other two struck his left index finger and right arm leaving the Holy Father seriously wounded with him being rushed to the hospital suffering from severe blood loss.

This event is significant historically and religiously for both the events surrounding the attempted assassination and the actions taken by Pope John Paul II after the attempt on his life.  No other event during the papacy of Pope John Paul II had a greater impact on the Catholic church with wide ranging repercussions impacting all around the world.  Here is a brief summary of why this may be the most important artifact for advanced collectors of Cold War historical and Catholic artifacts.

May 13 - Anniversary of The Three Secrets of Fatima

The attempted assassination of Pope John Paul II happened on May 13, 1981 which was the 64th anniversary of the Three Secrets of Fatima where the Virgin Mary appeared and delivered a series of apocalyptic visions and prophecies. This apparition of the Virgin Mary is now popularly known as Our Lady of Fatima.

Recognizing the significance of The Virgin Mary to this attempted assassination, the aspect of Mehmet Ali Agca sending the original owner of this card "Happy New Year Wishes" on the back of a Nativity Scene can not be overlooked.

There are several theories concerning the motivation behind Mehmet Ali Agca's assassination attempt on Pope John Paul II. From a possible "Bulgarian Connection" that was believed to have been planned by KGB Director Yuri Andropov due to the Pope John Paul II being from Poland.  The KGB thought that Pope John Paul II planning a pilgrimage to Warsaw was being planned to precipitate the collapse of the entire Soviet Union.

Another possible theory focuses on Mehmet Ali Agca being a member of the Grey Wolves. The Grey Wolves were part of NATO's secret Operation Gladio network. With the significant membership of Operation Gladio aligned members of the Italian P2 Masonic Lodge and the strategy of tension at the time there existed means, method, and motive.

The Mitrokhin Commission setup in Italy by Silvio Berlusconi revisited the motivation behind the assassination attempt. This commission determined that the leadership of the Soviet Union took the initiative to eliminate Pope John Paul II because of his support for the Solidarity movement.  These claims were based on computer analysis of photographs after learning that the Soviet leadership had put this task with the military secret services and not the KGB.

The response from Pope John Paul II was true to the teachings of Jesus Christ, with Pope John Paul II answering the question "Why did you forgive your would-be assassin?" with "I forgave him because that is what Jesus teaches us, He teaches us to forgive." and soon after the shooting asked for people to "pray for my brother [Agca] .. whom I have sincerely forgiven."

It was well reported in 1983 when Pope John Paul II met Mehmet Ali Agca and spoke to him privately at Rome's Rebibbia Prison where Agca was being held -- and where this card was mailed from.  Mehmet Ali Agca reportedly kissed the Pope's ring at the conclusion of their visit and Pope John Paul II was in touch with Agca's family over the years.  He met his mother in 1987 and his brother Muezzin Agca a decade later.

This grouping contains a number of items that have been professionally framed behind museum grade glass for long term preservation while being displayed.

The most important item is the Christmas Card which features a Nativity Scene on the front and has the message on the back wishing the original recipient of this card "With The Wishes for a Happy New Year" and has Mehmet Ali Agca's signature along with his name printed.  The rear of the frame has an observation hole behind the card so that you can see the signature and message that the attempted assassin of Pope John Paul II wrote.

Providing necessary documentation as to the authenticity of this New Year Wishes card is the original envelope in which it was received which retains its stamps and postmarks from Rome.  There is a Notarized Letter from Mr. Bernard Aubin documenting how he was able to receive this card from Mehmet Ali Agca while Agca was in Rabbiba Prison serving a life sentence for the attempted assassination. This letter was formally notarized on March 20th, 1986 and this letter is part of the framed grouping.

There are two additional newspaper printed items that complete the frame. One is an associated press article from 10/11/1999 where the Pope had spoken to children, telling them of forgiving his attacker.  There is also a newspaper photo of Mehmet Ali Agca in his "steel cage" at trial where he claims to be the second coming of Jesus Christ.