The Mossberg 500 HS410 is a .410 bore, pump-action shotgun with an 18 1/2 inch barrel, a synthetic stock and an innovative vertical grip/pump handle combination. It also boasts a proven Mil-Spec performance and an eight-shot capacity. As evidenced by its name – the "HS" stands for home security – this shotgun is all you need to protect your family in case of an emergency. 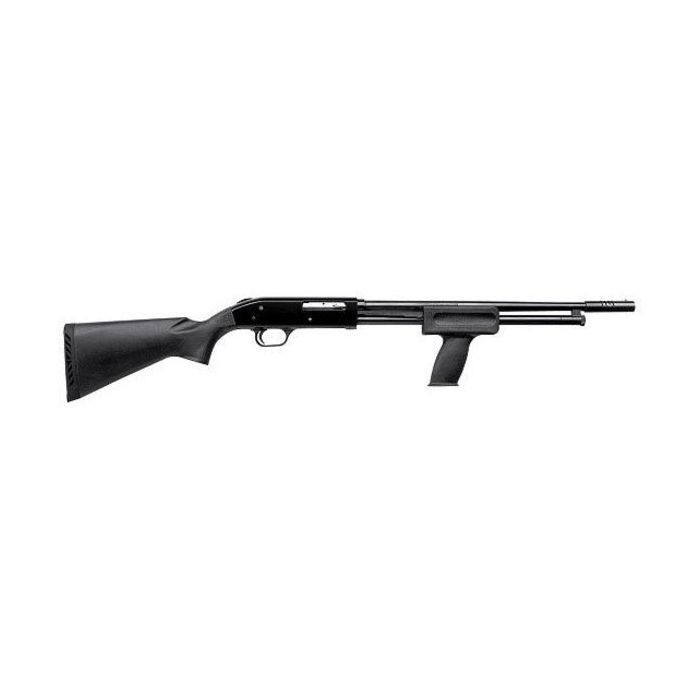 We here at Keepshooting.com believe in the Mossberg brand. As such we have chosen to become an official Mossberg stocking dealer, which means a couple of different things. It means we have committed to stocking approximately 30 of Mossberg’s finest rifles and shotguns. Not only that, but we will also have exclusive opportunities to check out new products as they are released. Finally, our commitment means that we will be getting these firearms at excellent prices and will, as always, pass those savings on to you. Many of those firearms are currently on sale in our web store. Today, we add the Mossberg 500 HS410 shotgun to a long line of fine products.

The Mossberg 500 HS410 shotgun is a .410 bore, pump-action shotgun that features an 18 1/2 inch barrel and an overall length of 37 1/4 inches. The defining features of the 500 HS410 are the incorporation of a synthetic stock for lightweight and comfort, a vertical grip for enhanced control and a spreader choke to maximize efficiency of the .410 shotshell at distances characteristic of home defense. Then there are, of course, the other features typical of a shotgun from the Mossberg 500 series: the ambidextrous thumb safety, anti-jam elevator, positive shell extraction and ejection and a bead sight. With a 2 1/2 inch chamber and a magazine tube that offers an eight-shot capacity that is more than capable of helping you get the job done, this shotgun is a perfect choice for those seeking personal protection and home defense with low recoil.

At the heart of the Mossberg 500 HS410, however, lies the legendary Mossberg 500 receiver. With origins in the 1960s, the Mossberg 500 is a series of shotguns that represented a range of varying hammerless, pump-action shotguns, all of which feature the same receiver. The 500 series is also the only shotgun that has passed the United States Military's Mil-Spec 3443G standards, which just serves to illustrate the superior performance and reliability associated with the Mossberg 500 HS410.

You would think putting a price on your home and family's safety would be nearly impossible. It turns out that you can do just that. Fortunately, it is much cheaper than you would imagine. Consider this shotgun for: