The Mossberg 500 Tactical is a 12-gauge, pump-action shotgun with an 18.5-inch barrel and a comfortable pistol grip. With a proven Mil-Spec performance and a 6-shot capacity when used with 2.75-inch shotshells, the 500 Tactical is exactly what you want when the apocalypse turns men into beasts. 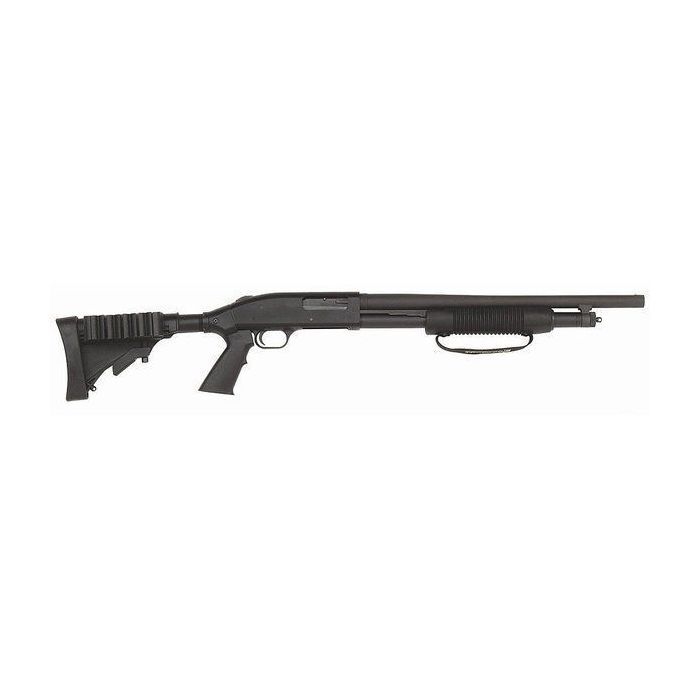 We here at Keepshooting.com believe in the Mossberg brand. As such we have chosen to become an official Mossberg stocking dealer, which means a couple of different things. It means we have committed to stocking approximately 30 of Mossberg’s finest rifles and shotguns. Not only that, but we will have exclusive opportunities to check out new products as they are released. Finally, our commitment means that we will be getting these firearms at excellent prices and will, as always, pass those savings on to you. Many of those firearms are currently on sale in our web store – the Mossberg 500 Tactical shotgun is just the next in a long line of fine products.

The Mossberg 500 Tactical shotgun is a 12-gauge, pump-action shotgun that features an 18.5-inch barrel and an overall length of 38.5 inches. One of the defining features of the 500 Tactical is the inclusion of an adjustable, synthetic, six-position stock not unlike those typically found on M4 rifles. This telescoping stock adjusts easily to offer a length of pull measuring between 10.75 inches and 14.625 inches. The stock also offers carrying space for up to five shotshells. Chambered for both 2.75- and 3-inch shotshells, the magazine tube has a 6-shot capacity that is more than enough to get the job done. The shotgun also includes an ambidextrous thumb safety, pistol grip, gold bead front sight and a nylon hand strap on the forend.

At the heart of the Mossberg 500 Tactical, however, lies the legendary Mossberg 500 receiver. With origins in the 1960s, the Mossberg 500 is a series of shotguns that represented a range of varying hammerless, pump-action shotguns, all of which feature the same receiver. The 500 series is also the only shotgun that has passed the United States Military's Mil-Spec 3443G standards, which just serves to illustrate the superior performance and reliability associated with the Mossberg 500 Tactical. That means this shotgun is suitable for saving your life.

What are you waiting for? Are you waiting for the floods to wash you away? You should not be. You should be pulling out your credit card and typing in your information so you can get a Mossberg 500 Tactical delivered as soon as possible. Consider this shotgun for: