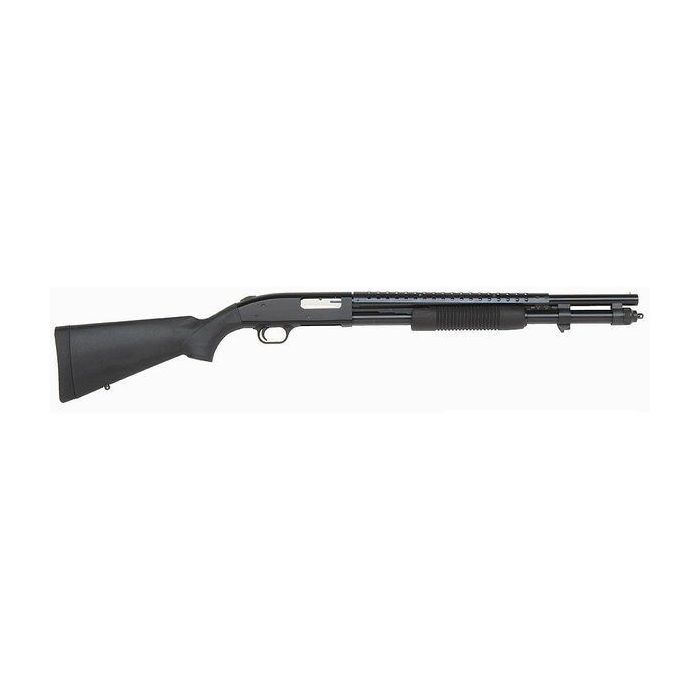 5 1 (1)
You will not find any rails for mounting tactical equipment on the Mossberg 590SP. Nor will you find any impractical bells and whistles – just good old-fashioned shotgun. The Mossberg 590SP is a 12-gauge, pump-action shotgun with a 20-inch barrel and something to prove. Out to prove that less-than-pompous shotguns still have a place, the 590SP carries proven Mil-Spec performance and a 9-shot capacity that will keep your home safe.

At the heart of the Mossberg 590SP lays the legendary Mossberg 500 receiver. With origins dating back to the 1960s, the Mossberg 500 is a series of shotguns that represented a range of varying hammerless, pump-action shotguns, all of which feature the same receiver. Variations were generally found in the barrel length, bore size, choke options, capacity, sights and stock/forend materials. The 500 series has always been marketed as multi-purpose shotguns designed for use in less-than-favorable conditions. As such, all Mossberg 500s feature interchangeable barrels, which provides for a number of different configurations that can quickly turn a 500 into a field gun, a slug gun, a defensive gun or a sport gun. Additionally, they are all easily disassembled to allow for easy cleaning and simple maintenance. The versatility of the line has even earned it a spot with military forces the world over.

As noted the Mossberg 590SP boasts Mil-Spec performance. The Mossberg 500 series is the only shotgun that has passed the United States Military's Mil-Spec 3443G standards, which just serves to illustrate the superior performance and reliability associated with the Mossberg 590SP. In other words, trusting your life to this shotgun is not a bad idea.

The Mossberg 590SP is a 12-gauge, pump-action shotgun with a 3-inch chamber. The magazine tube has a 9-shot capacity when using 2.75-inch shotshells – pretty nice capacity for a shotgun. The shotgun also features a 20-inch barrel and an overall length of 41 inches. Easily manageable, the 590SP weighs in at just 7.25 pounds. Other features include an ambidextrous thumb safety, a front bead sight and a pre-installed heat shield, which serves to protect your mitts from overheated barrels. Like I said, there are no bells and whistles – just tough-as-nails shotgun.

So if you are looking to shy away from crowds with a high-quality, reliable shotgun that boasts proven performance, then chances are you want the Mossberg 590SP. This shotgun is a great choice for: 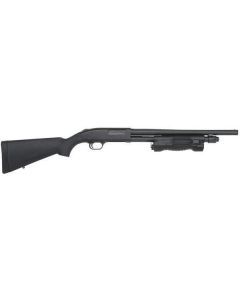 Overall Rating
Don't come any better!
Review by RemMax 3/24/13
Verified Buyer
I own several Mossberg Shotguns including a 5500 auto-loader and my 500 Slug gun setup with a fully rifled cantilever barrel for deer hunting in this state and even a spare just because I could (Used to use it for trap and skeet before I bought my over/under) But to the point
My Mossberg 590SP... This really is a nice shotgun for home defense, with the ability to hold, cycle and chamber anything from 9 3" magnum slugs or 2.3/4 buckshot down to a pile of those pint size Aquila mini shells for when over penetration is a concern it will cycle, feed, fire and eject any of them all day long
One feature I found on mine that's not mentioned in the write up is the ability to mount your M16 Bayonet on the end of it.
God only knows why anyone would ever need to mount a bayonet on a shotgun with a 9 shot tube on it but I guess in some parts of the world s--t does get that deep! To me its just a cool novelty I noticed on it after I got it home
Otherwise it is a extremely robust, reliable and rugged shotgun that I keep loaded and close to my bed and if that night ever should come that I find myself in need of defending my family with lethal force I will have no hesitation at all in picking my Mossy 590SP up to defend the lives of my family and myself. While we all pray that night never comes I have complete confidence in my Mossberg590SP to keep us safe if it ever should
RemMax