Hailing from the brand new Mossberg FLEX™ Series, the Mossberg FLEX™ 500 Tactical is a 12-gauge, pump-action shotgun with an 18 1/2 inch barrel alongside an ergonomic pistol grip. Based on the legendary Mossberg 500/590 platform, which itself was lauded for its customization, the FLEX™ Series ushers in an unseen level of customization thanks to the new tool-less locking system, or TLS™. Featuring a magazine tube that provides for a potential capacity of six shots, the FLEX™ 500 Tactical is equipped with a variety of standard features, each of which can be swapped out in minutes for a range of different shooting applications. Whether you are an avid hunter, a home defender or simply interested in recreational shooting, the Mossberg FLEX™ 500 Tactical will make an excellent addition to your collection. 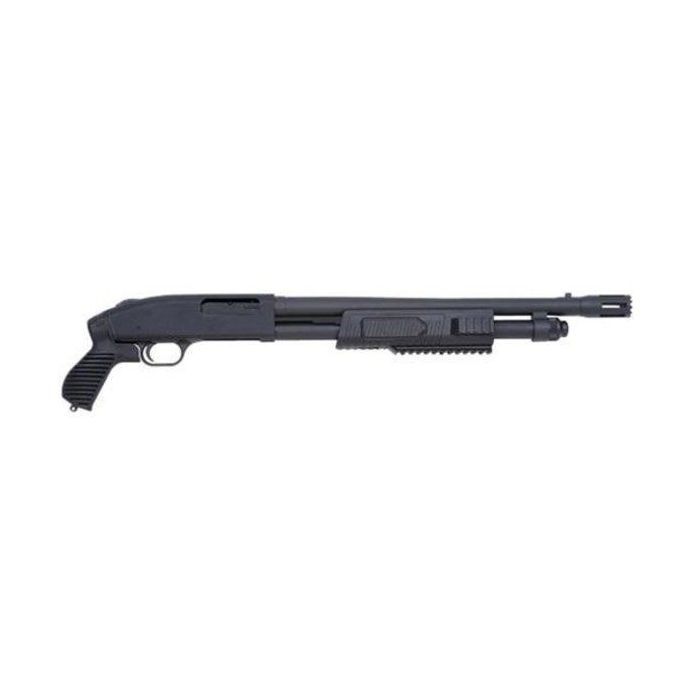 Though it may not be immediately apparent, the Mossberg FLEX™ 500 Tactical is a shotgun that traces its lineage all the way back to 1961 when the Mossberg 500 Series made its debut. The Mossberg 500 Series is a series of shotguns that represents a range of varying hammerless, pump-action shotguns, all of which feature the same receiver. Variations are generally found in the barrel length, bore size, choke options, capacity, sights and stock/fore-end materials. The 500 Series has always been marketed as a multi-purpose series designed for use in less-than-favorable conditions. As such, all Mossberg 500s feature interchangeable barrels, which provides for a number of different configurations that can quickly turn a 500 into a field gun, a slug gun, a defensive gun or a sport gun. Additionally, they are all easily disassembled to allow for easy cleaning and simple maintenance. The versatility of the line can also be seen in the numerous variations, which includes the brand new FLEX™ Series.

Brand new to the Mossberg lineup is the company's FLEX™ Series. Marketed as the ultimate adaptive shotgun platform, the FLEX™ Series is built on the legendary Mossberg 500/590 platform. As such, the FLEX™ Series shares the uncanny durability and proven engineering that is characteristic of the 500/590 platform while also ushering in an unseen level of customization. What distinguishes the FLEX™ Series from the traditional 500/590 platform is its utilization of the company's patent-pending tool-less locking system. The tool-less locking system, or TLS™, is a series of three connectors that provide shooters with a simplified method of switching stocks, fore-ends and recoil pads for a variety of shooting applications. What's more is that Mossberg has developed a variety of accessories that can be used interchangeably on any FLEX™ Series shotgun.

As noted, the Mossberg FLEX™ 500 Tactical is a 12-gauge, pump-action shotgun with an 18 1/2 inch barrel that sports a blued finish alongside an overall length of 31 inches. The shortened magazine tube, which provides for a five-shell capacity and an overall capacity of six with one shell in the chamber, joins a sleek stand-off/breacher barrel for a comfortable balance. Like the 500/590 platform, the FLEX™ 500 Tactical features an aircraft-grade aluminum construction that gives the shotgun its light weight of just 5 3/4 pounds. Other features include an ambidextrous thumb safety, a white dot front sight, an ergonomic pistol grip with sling swivel attachment and a synthetic fore-end with three MIL-STD 1913 rails for the attachment of lights, lasers, grips and other tactical equipment. Of course, being that this is a FLEX™ Series shotgun, most of these features are customizable.

The Mossberg FLEX™ 500 Tactical is an excellent choice for: