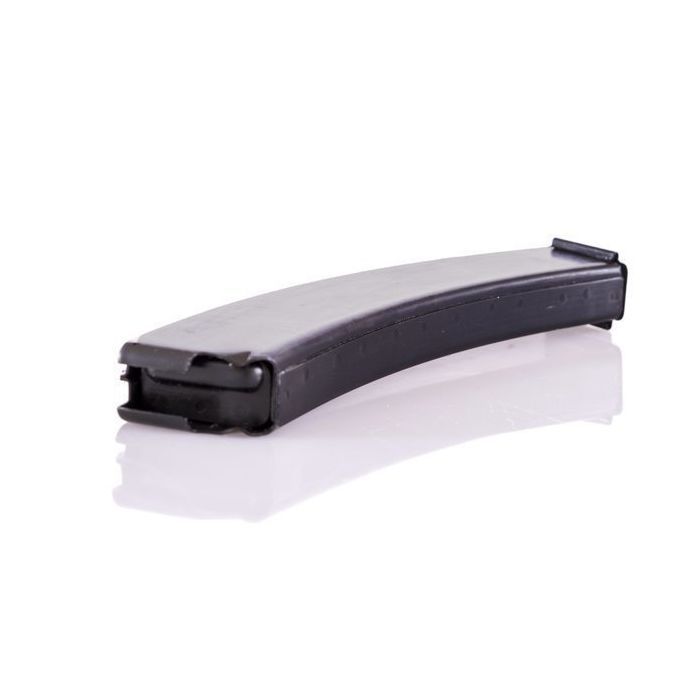 The PPS-43 Magazine is a 30-round capacity magazine for the PPS-43 sub-machine gun. Designed to fit and feed 7.62x25mm ammunition, this magazine will work with any firearm that is based on the original PPS-43 design. This includes the popular semi-automatic Pioneer Arms Corporation PPS-43C pistol that is made in Poland by the same arms factory that originally made this magazine for the Polish army.

The PPS-43 led a very long and distinguished service life in virtually every army aligned with the Soviet Union in the Warsaw Pact. With use in countries as diverse as the Soviet Union and war-time Nazi Germany, most of the important battles fought in the modern era have seen the PPS-43 or variants of it being wielded by one side or the other.

One of the original parts that are used with the new PPS-43C from Pioneer Arms are the original Polish Army PPS-43 magazines. These magazines were manufactured by Polish factories during the Cold War for use in the defense of Poland from the West. Now with the introduction of the PPS-43C, large quantities of Polish surplus PPS-43 magazines are being exported to consumers in the United States.

Overall Rating
Perfect fit
Review by Hayhauler 10/16/20
Great service as always...perfect fit.....
Overall Rating
PPS-43 mags
Review by rybur 10/7/15
As hard as these are for me to find on regular websites that I shop on, I pounced on them as soon as I saw KeepShooting got them in. These came without rust or preservative grease/oil and almost ready to go; I say "almost" because the feed lips on a couple of them needed a little bending back to form, but that's as they came with my PPS-43c, so I bet they came from storage that way. That aside, it took only a few minutes to re-shape the lips and get some oil on the used but still beautiful blued surfaces. Only one had dimples near the bottom, whatever that means for a design iteration. All had witness holes in the same locations and were individually bagged. Love the pricing of these; wish I got more!