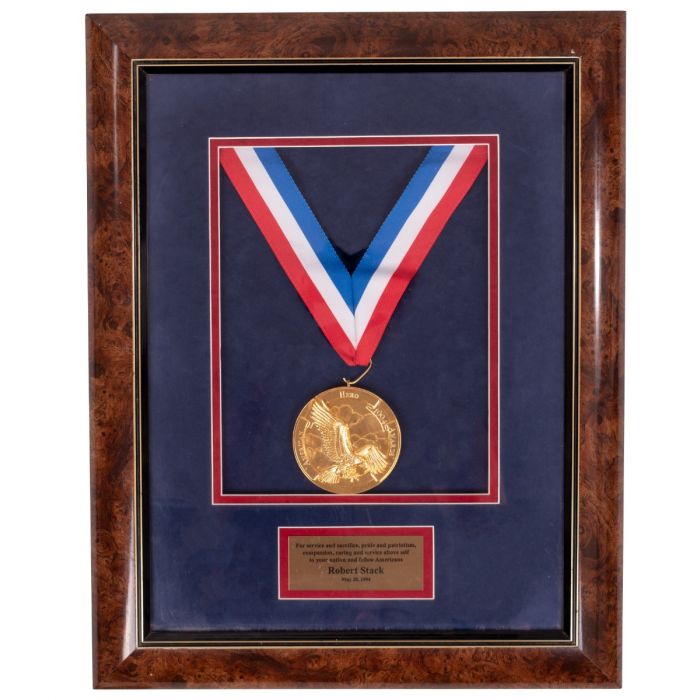 (0)
This is a one of a kind item that shows a rare side of Hollywood - the pro-gun side - an authentic NRA American Hero Gold Medal that was given to the famous actor Robert Stack. The engraved plaque reads "For service and sacrifice, pride and patriotism, compassion, caring and service above self to your nation and fellow Americans." The award was bestowed to Robert Stack by the NRA at the annual meeting held in Minneapolis on May 20, 1994.

Robert Stack was an avid lifetime supporter of the 2nd Ammendment having developed a passion for shooting early in life. By the age of 16 he was a member of the All American Skeet Team and set two world records and became national champion in the sport. This passion for the shooting sports was a lifelong pursuit, where Robert Stack and his wife Rosemarie spent time together shooting, hunting, and going to exotic Africa for safari hunts.

While visiting Universal Studios at age 20, Robert Stack was introduced to Joe Pasternak who offered him an opportunity to enter show business. His first film was released in 1939 and his film career continued all the way until 2001. During this time frame Robert Stack answered the call to fight for the country during World War II where he served as an aerial gunnery officer and gunnery instructor with the US Navy.

Perhaps two roles played by Robert Stack are his most memorable both of which were aired on television, the first being The Untouchables where Robert Stack played crimefighting Eliot Ness on the ABC television drama series.  The Untouchables ran from 1959 to 1963 and was produced by Lucille Ball's Desilu Productions where it was a hit show that had fans all around the world who would tune in to watch every night it was on. The second role was not really a role but Robert Stack hosting Unsolved Mysteries, which Robert Stack thought very highly of the interactive nature of this show including the hotline that was seen as a great crime-solving tool.

For his lifetime of service to the country and the 2nd Ammendment, the NRA bestowed their highest honor on Robert Stack at the NRA annual meeting held in Minneapolis on May 20, 1994. Recognizing the lifelong contributions that Robert Stack made to our country and his advancement of the shooting sports, there is perhaps no better person to have been given this honor by the NRA and their members.

This award is an excellent opportunity to own an important piece of Hollywood and NRA history, which is truly a rare combination. The award was given to Robert Stack framed and there is a letter included from the company whom the NRA contracted with to ensure that this American Hero Award was presented in a truly impressive form. Included with this award is Robert Stack's wife Rosemarie Stack's NRA Lifetime Member award certificate.