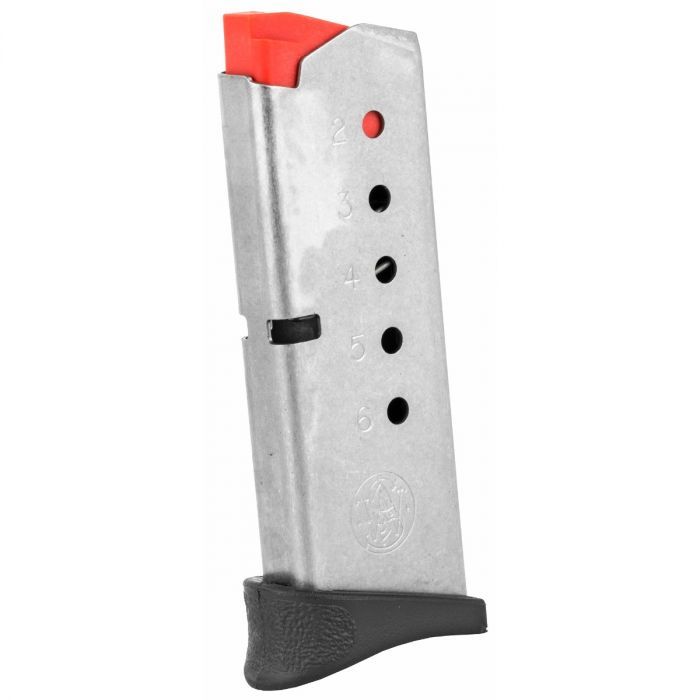 The Smith & Wesson Bodyguard 380 magazine is an original, factory-produced magazine for the Bodyguard 380 pistol. As such, you should expect nothing but a perfect fit and function in your pistol. These six-round, single-stack magazines feature a steel construction and represent both the quality and the value that you have come to expect from a company like Smith & Wesson. Not to mention, they include plastic finger-rest floor plates that provide for a full three-fingered grip, which ship alongside the standard, flush-fitting floor plate as well.

Notify me when this product is in stock
SKU N19930

The Smith & Wesson story is an interesting one. It started when Horace Smith and Daniel B. Wesson's first foray in 1852 saw the manufacture of a lever-action pistol known as the Volcanic pistol for their Volcanic Repeating Arms Company. Four years later, after financial difficulties led the company to come under different ownership, the pair left to begin anew and started work immediately on a newly designed revolver known as the Smith & Wesson Model 1. The rest is history. Now, over 150 years later, Smith & Wesson is still going strong and shows no signs of slowing down. With that kind of experience, it is not surprising that the company continues to produce innovative new firearms like the Smith & Wesson Bodyguard 380.

Just as its name suggests, the Smith & Wesson Bodyguard 380 is an easy-to-use pistol designed for personal protection that is chambered for the .380 ACP cartridge. It brings innovation to a market that is crowded with near-identical pocket pistols that offer nothing out of the ordinary. The Bodyguard 380 offers a state-of-the-art design that makes personal protection foolproof by focusing on the qualities that matter most. Of course, this is all lost without a proper magazine to feed the pistol.

As noted, the Smith & Wesson Bodyguard 380 magazine is a Smith & Wesson factory-produced magazine for the Bodyguard 380 that is designed to hold and feed six rounds of .380 ACP ammunition to your pistol. The steel body features a stainless finish to protect against rust and other corrosion, putting it miles ahead of the aftermarket competition. This magazine benefits from the performance and reliability you would expect from any Smith & Wesson factory product and will fit and function in any Bodyguard 380 pistol. The real draw, however, is the inclusion of an extended finger-rest floor plate that provides for a full three-fingered grip on the pistol, which ships alongside a standard, flush-fitting floor plate.

Generally speaking, it is beneficial to seek out original factory magazines like the Smith & Wesson Bodyguard 380 magazine for your firearms. Original factory magazines are manufactured by the same company, to the exact same specifications and tolerances as those that ship with the pistols for which they are designed. They are also made from the same materials, which ensures both fit and function in your firearm.