The store will not work correctly in the case when cookies are disabled.
Menu
Account
Be the first to review this product
$899.54
Out of stock
SKU
2-454029M

The Taurus Raging Bull Model 454 is an extraordinary revolver suitable for a number of shooting applications, including handgun hunting and personal defense. This double/single-action revolver is chambered for the powerful .454 Casull cartridge and boasts a five-cartridge cylinder that all but assures you will obliterate your target. As one would expect, the Raging Bull ships with everything characteristic of an ordinary Taurus revolver with the addition of a few practical features that are sure to make it one of your new favorite firearms. 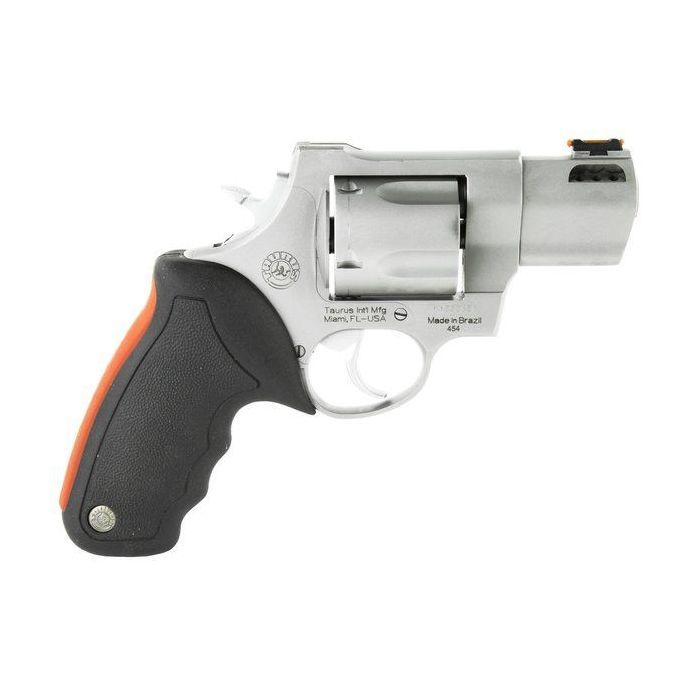 Today, Taurus International offers a wide range of products from revolvers to both steel- and polymer-framed pistols. The company now seeks to bolster their lineup with the addition of the new Taurus Raging Bull Model 454, a powerful revolver that is chambered for the .454 Casull cartridge that has been specifically designed for handgun hunting.

As noted, the Taurus Raging Bull Model 454 was primarily designed for handgun hunting, an activity that is typically performed using specialized pistols and revolvers with longer-than-average-barrels. Additionally, they are often chambered for powerful cartridges like the .44 Magnum or .454 Casull cartridge, each of which is more than capable of taking down large game. The Raging Bull Model 454 meets both of these criteria.

This particular model of the Taurus Raging Bull Model 454 features a 2 1/4 inch barrel and an overall length of 7 1/2 inches, making it significantly smaller than the standard model. Weighing in at a respectable 48 ounces – exactly three pounds – this reasonably-sized revolver boasts a full steel construction with a stainless finish and requires both a steady hand and a bit of confidence. In addition to sharing all of the features normally associated with a Taurus revolver – like the ergonomic rubber grip, internal security system and transfer bar mechanism – the Raging Bull Model 454 shares all of the features typical of a revolver in the "Raging" series, including the cushioned red grip insert and a dual lockup cylinder. As Taurus International is never a company to skimp, the revolver also boasts some other nice features like its ported barrel and red, fiber-optic front sight

Reviews
Write Your Own Review
Only registered users can write reviews. Please Sign in or create an account
We found other products you might like!
More from Taurus
Copyright © 2002-present United Defense LLC. All rights reserved.