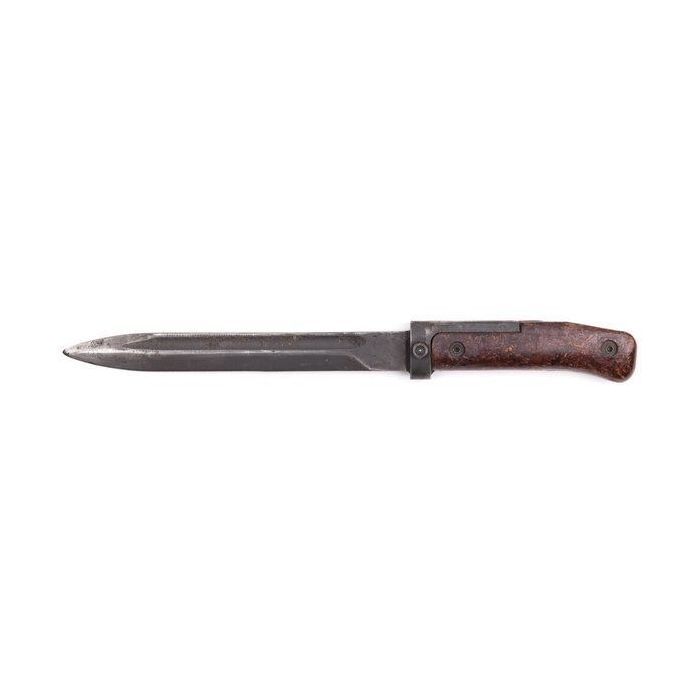 The Vz58 Bayonet is an authentic original Czech Army bayonet for the Vz 58 rifle. This rifle was the service rifle for the Czech Army during the height of the Cold War. Each bayonet comes with a leather scabbard to give you a complete VZ58 Bayonet to add to your collection.

Notify me when this product is in stock
SKU VZ58B

These original vz. 58 bayonets are all authentic Czechoslovakian military surplus pieces. They were originally issued alongside vz. 58 service rifles that would have been issued to ground forces in the Czechoslovak People's Army, now the army of the Czech Republic. Other users of the vz. 58 include Afghanistan, India, Iraq, Uganda and many others.

Overall Rating
Looks good!
Review by Ethan 12/23/17
Mine arrived in very good shape. The leather pouch was in good shape, but after a cleaning with saddle soap, drying, and then an application of leather lube, it really looks great! The bayonet is in good shape with no damage to the "beaver barf" grips. The metal had a tiny, tiny amount of orange corrosion that wiped off with one pass of an oily rag. No bends, dents, or damage on the blade either. Looks great attached to my VZ 58!
Overall Rating
An interesting way to get into bayonets.
Review by Timothy 6/5/17
This is the second vz 58 bayonet I have bought from Keep Shooting. The first one was obviously well used, had some pits in the blade, and a lot of writing on the scabbard (which actually was pretty cool-- it told me where the guy who originally carried it was from, for one thing). The first one I got was a short tang, two rivet mode. This one is a one rivet, short tang but has the later lower crossguard extention, so adds some variety. A nice blade, serial numbered. All in all, a good knife at a good price. You really can't go wrong with KS.com
Overall Rating
Good knife
Review by Timothy 4/28/17
This is a nice, standard Czech type one, short tang. Good price.
Overall Rating
great knife
Review by Jonathan 12/24/13
It's nicely weighted, looks nice on it's own and with my other bayonets, and it has a pretty nice leather sheath, which is angled so it can be taken out better if it's on your belt. I would definitely recommend buying this bayonet, even if you don't own a vz 58.
Overall Rating
Great Multi-Purpose Knife...
Review by Jedediah The GyroCaptain 5/13/13
I'm a big fan of the Vz.58 bayonet. At this price I have bought a few for use as utility knives.

* The bayonet It is made from quality steel, and takes & holds an edge quite well.

* The sheath is made from quality leather, and the belt loop is sewn at an angle to make it easier to draw the knife.

* As far as bayonets go, the Vz.58's is very lightweight. It doesn't have much of a cross guard, so be careful if you plan to go around getting into knife fights.

* The scales on the handle are a weird resin-mixed-with wood chips. They're solid, but again, they're pretty odd.

* Finally, if you have qualms about buying "Commie gear," remember that Czechoslovakia tried to move away from Communism in 1968, only to be invaded by the Soviets & the rest of the Warsaw Pact. So, the Czechoslovakians probably hate Commies more than you, so their bayonet is good to go.
Overall Rating
happy customer
Review by powderbob 3/19/13
I don't have the VZ58 rifle but have some other AK's and I bought it to add to my little collection of bayonets.It looks fine, steel and sturdy.The leather sheath is in good condition too,I just gave it some leather preserver,it has 8 or 9 names and signatures written on it and I assume it's from some former czechoslovakian soldiers.Good hard to find stuff.Thanks KeepShooting.