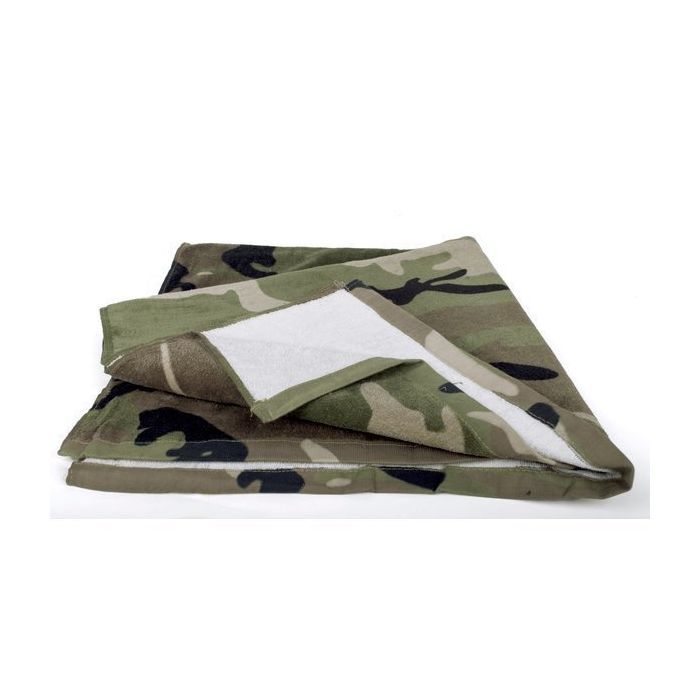 The Woodland Camo Bath Towel is made by Mil-Tec of Germany. This bath towel is made from 100% cotton for maximum absorbency and features a rich and vibrant woodland camouflage pattern on one side. With the large dimensions of this towel, you will be able to dry off comfortably and completely when you use it.

Mil-Tec of Germany has been producing military style clothing and accessories for longer than any other company in the world. This quality Woodland Camo Bath Towel is an example of this as the product has every day use and has been made with a military theme.

You will be super pleased with how nice this towel looks and how great it works to dry up after a swim or shower. No longer will you be keeping an eye on your towel at your next pool party, you can be the only person who has a woodland camouflage towel.

Overall Rating
Go bag ready.
Review by L. N. 9/29/17
Bought two for our go bags. They are perfect, appear to be new and of good quality. Durability may be a question buy they are adequate for our intended needs.
Overall Rating
Nice towel, great price!
Review by Jim 10/6/16
Looks to be good quality towel! Bought them as Christmas presents for the daughter who loves camo stuff! I think she will love these and might even use them to cover up with on the couch!!!
Overall Rating
Good price and quality
Review by Gregory 10/1/16
Got these for Christmas. They will make great presents. Good quality at a good price.
Overall Rating
Good buy
Review by DREW 9/25/16
These towels are great. Very well made. The price would be hard to beat. Make sure when you buy some of these that you add one extra for cleaning your rifles. Tell your wife 4 for the house and one for the rifles, she'll like em and won't say a word except maybe "why didn't you buy more?". Thats right, it's that good of a buy. Thanks again KS!
Overall Rating
Nice large towel
Review by Colonel K 6/29/16
As a retired Army soldier I seem to gravitate towards camo "stuff". This towel is no exception,and I was surprised how good it is.Initially,I bought one,and after a time using this large towel I realized I needed a few more,and fortunately they were not sold out.I would remiss if I didn't correct reviewer Van who stated the towels were made in China-they were definitely not! GHMB indicates German manufactured which is on the label sewed on the towel's edge.It's a rather large towel ,and my son loves to show it on the beach........Thanks to Keep Shooting for selling this towel.
Overall Rating
Not baddd towel
Review by van 5/17/16
Just test my towel in the shower and it was ok. Not as thick as I but they still do the job fine. Very good for sitting in a sand box with the kids and they hold up good in the washing machine. I air dry all my towels to keep them from faden much. Wish it had better sewing on the edges and it is made in China,but still not a bad towel for the price and it is big too. Bought 2 of them.