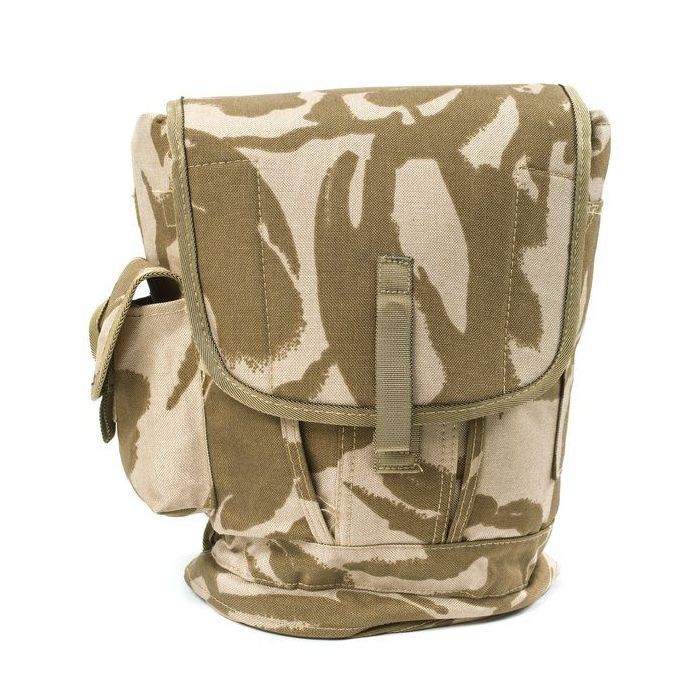 The British Army Desert Camouflage Field Pack is a medium sized field pack that saw extensive use in the Iraq war. Soldiers in the British Army were issued this field pack as a means of transport for their gear while in the deserts of Iraq and Afghanistan.

The British Army issues several different styles of field packs to every soldier. This particular field pack is issued to soldiers who are operating in desert environments, including soldiers who served in the Iraq and Afghanistan wars. Field packs are designed to give soldiers the ability to carry gear that might not fit easily onto a load bearing vest or other equipment transport method.

Overall Rating
great everyday hauler
Review by james 2/25/17
Super quality and unique, got 2, using one for the daily transport of essential stuff, and another to replace it, (if it ever wears out). Top quality and built to last.
Overall Rating
aside from the strap the item is great
Review by Alexander 5/14/16
thin strap could use some padding, otherwise a great waterproof pack
Overall Rating
Perfect!!!
Review by Michael G 2/28/16
Very well thought out..... Great for traditional binoculars or scopes or jest a general carry-all shoulder bag. I've seen one in multi-cam (British Army) also; Stitching is far superior. Get one when available.
Overall Rating
Excellent!
Review by CaptMike 8/22/15
A little smaller than it appears in the photo, but awesome nonetheless. The one I received was unissued. Waterproof and quite useful as a day pack.
Overall Rating
Outstanding value
Review by j 8/19/15
Well made ...cavernous storage practically indestructible. Buying a second one just because it is so useful.