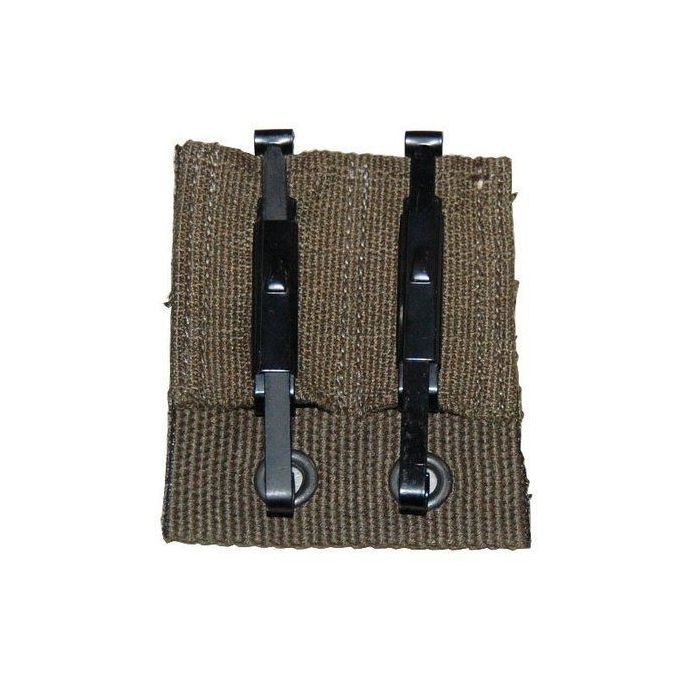 The Bundeswehr ALICE adapter is a small device that was designed to allow German-made modular equipment to be easily attached to ALICE load-bearing belts and vests.

Notify me when this product is in stock
SKU BAA

The Bundeswehr ALICE adapter is a small piece of canvas fabric with four metallic grommets. The grommets are designed so that they may be slipped over the studs found on the clips of German-made modular equipment. What good does that do? The canvas also sports two ALICE clips that make attaching this adapter to any piece of the ALICE system very quick and very simple. 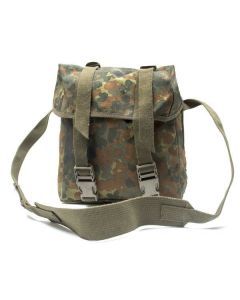 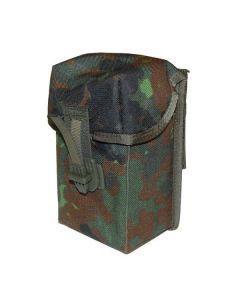 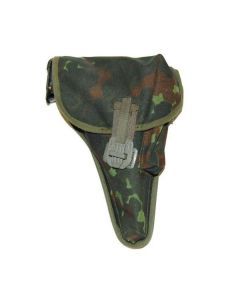 You're doing it wrong. The plastic clips are meant to go into the holes; you insert the longer ones first by inserting at a 45 degree angle, then you lower the other end and fasten. At least, that's how it worked when I was overseas for 6 years.

We learned something very important; never with force.. If you have to force something with your firearm or equipment, chances are you're doing it wrong.
Overall Rating
love it
Review by Kimberly 1/30/14
i have a lot of German equipment and I've never had a problem with these adapters.
Overall Rating
Bundeswehr ALICE Adapter
Review by Daniel 10/7/13
I had no problems with it worked just fine.
Overall Rating
Snazzy little adapter
Review by Patrick 6/11/13
I ordered one for my P-38 holster. It took a little effort to clip on, but it worked pretty well. Just remember to orient it correctly, so it doesn't flop around. The grommets did show signs of deformation after a few months of installation, probably the only issue I would have with it.
Overall Rating
Bundeswehr ALICE Adapter
Review by Cal 4/22/13
Worked well for me. No more difficult to put on than any of the other adapters that came with previous purchases. It takes a little effort to manipulate the pegs into the adapter, but they seem well made and solid.
Overall Rating
Bundeswehr ALICE adapter
Review by Dave 3/21/13
I received this yesterday, mounted it on a Flectar holster for a P1. Unlike the other reviewer, I had no problem mounting it with a little care. The adapter is plenty well-made for its intended use, seems fairly rugged in fact. There is no need to force the plastic pegs on bundeswehr equipment through the grommets. Just manipulate the pegs through, it is intuitive, take your time.
Overall Rating
Good Idea, Bad Craftsmanship
Review by Jedediah the GyroCaptain 1/10/13
I had been looking for these adapters for quite some time, as everyone that offered them were out of stock. I bought 3 from Keepshooting, and they were all trash. The grommets on the adapter are too small to fit the pegs on Bundeswehr equipment. The pressure of trying to push the pegs in (by hand) resulted in the grommets tearing out of the nylon. I bought 3 adapters, and had the grommets rip out of two of them; I gave up and threw them all away...I love Keepshooting, and this is my third order from them--its just that this is a bad piece of equipment.