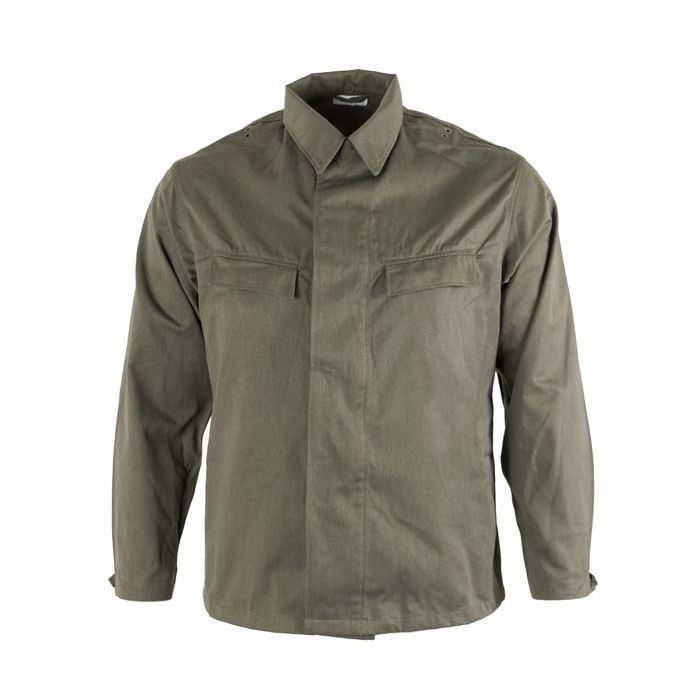 The East German OD Work Jacket is an authentic East German Army jacket. These work jackets are made from a tough material that will stand up to daily use and abuse at your shop or job site. Vintage East German Army uniform components like these jackets are always popular as the color and design make them ideal for wearing with any type of civilian clothes.

The East German Army during the height of the Cold War was once one of the largest standing military forces in the world. With the location of the former East Germany being central along the border between the West and the Soviet Union this territory was seen as one of the most likely paths for any ground war. Recognizing the importance of this area, the East German government built their forces up to be able to defend or attack depending upon the circumstances.

This importance led the East German Government to place an emphasis on producing quality materials for use by the East German Army. While most armed forces manufactured uniforms to the minimum standards, the East German army produced uniforms that would stand up to the abuse of combat conditions. These work jackets are a great example of this dedication to quality as 30 years after being produced they look as good as they did when first made. The materials are still as strong today as they were when first issued, the stitching is flawless on all seams, and all buttons remain for closing pockets or adjusting cuffs. Considering the amount of time that has passed, the conditions of the fall of East Germany, and the turmoil with the break up of the Soviet Union if these were typical military work jackets they wouldn't be suitable for wearing much less in "near new" condition.

Overall Rating
5 Star All Around
Review by MelV 3/9/21
I ordered M and what I got is between US Medium and US Small. It fit me well. Material looks 100% cotton but it does not say on the tag, It is well made and made of good material. Truly 5 star all around so I highly recommend this.