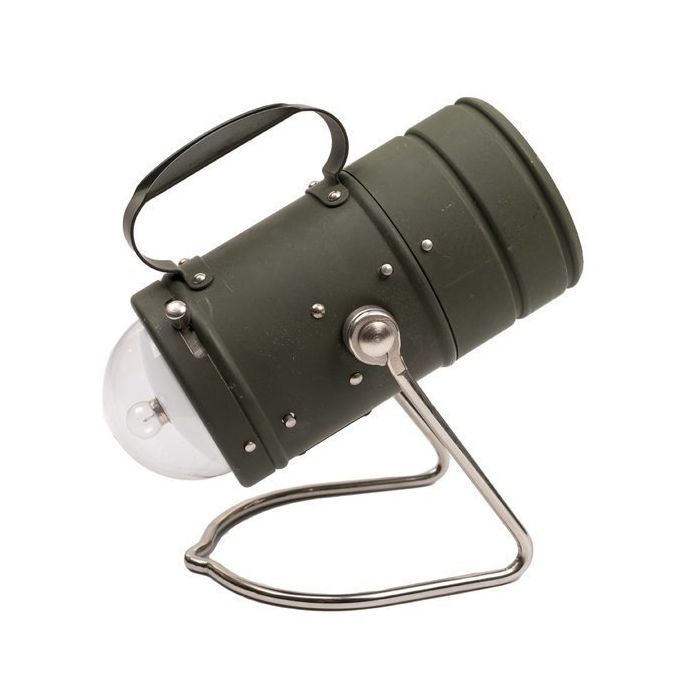 The German Army Varta Light is a handy portable battery operated lamp that was the work horse of the German Army. Designed by Varta these lamps are able to act as a flash light or a camp light depending upon your current need. The operational mode can be quickly changed by the lever on the side of the lamp from flash light to camp light and back again.

The German Army Varta Lamp is a vintage style army lamp that was used by virtually all soldiers in the German Army. This lamp was so successful it became part of the auto emergency kit that was found in luxury cars produced in Germany in the 1960s. Soldiers and civilians alike praised the Varta lamp for the versatility it offered and the performance has been combat proven since the 1960s.

Overall Rating
Very Good Quality, Old School Military Grade
Review by Hunter 12/11/17
This thing is neat! I bought it not even realizing it came with the box and paperwork when keepshooting had it on sale for $12. I seems very well built, all steel and comes with a battery adapter to use 4 D cells instead of a 6V lantern battery. Since most 6V lantern batteries are only 4 D cells in a packaged form and cost more, I am using 4 D cells. Also there are 2 new bulbs hidden inside the reflector should either burn out.

I am keeping this in my jeep this winter, seems just the ticket in case of a flat tire at night.
Overall Rating
Great Tool for the Garage or Car Trunk!
Review by BSIDEPC 12/7/17
German Varta Light: I am very impressed with this lantern. It comes with German instructions and a German parts list. It also comes with a battery adapter which allows you to use 4 D-cell batteries in place of one 6v lantern battery. I’m using it with a 6v lantern battery. On one end is a “spot” light and on the other end is a lantern light. The light switch on the device is on the lantern side, where the UP position is Lantern, the far DOWN position is Spot Light, and the MIDDLE position is OFF. The switch and all other structural components on this light are STEEL. It has a 360 degree position stand which is attached with two permanently tensioned bearings. The overall construction of the light is top-quality--it’s very well made. It uses traditional style filament bulbs. It has two spare bulbs tucked away under the spot light bulb fixture--one for each side. This is not LED so don’t expect to illuminate the dark side of the moon with it. That being said, the light quality is VERY good using the old-school technology, which, if you are like me, you know that low-tech serves special purposes. I did have a slight issue at first getting the “spot” light side to work. The contact strip that runs from the switch mechanism back to the spot light was not contacting the metal frame of the center polarity fixture to activate the bulb. I believe that step 2 of the German instructions tell you to bend the tab inward, or something. Either way it wasn’t hard to figure out that the tab needed to be bent inward a little to come into contact with the metal back-end of the bulb fixture. NOTE: The battery stays in place and does not rattle inside the unit due to the bending inward of the contactor-tab for the rear light. It becomes a very tailored fit! Most likely they leave the “bend” step to the end user so that initially you have no problem getting the battery adapter out of the new unit. Anyway, I’m keeping this bad-boy in the garage. I intend on using this as a work light for when I work under my car(s) to change oil etc. Bottom line: this is a very well made old fashioned light for great use as a work light. It’s rugged, it’s functional, and well worth every penny. I think these would make great Christmas gifts! Thanks Keepshooting! Excellent find!