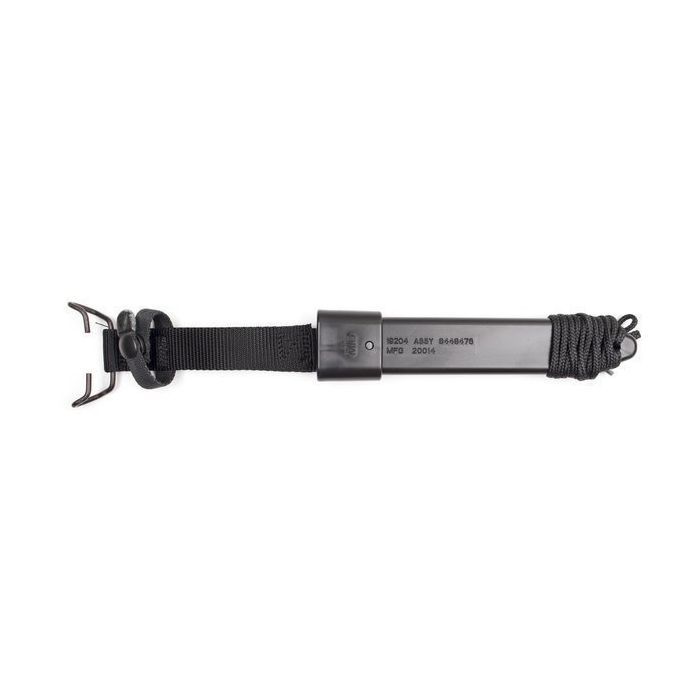 The M10 Scabbard is a USGI issued scabbard that will work with the M4, M5A1, M6, and M7 bayonets. This scabbard is commonly seen used with the M7 bayonet as it was released at the same time as the M7 was the standard US military bayonet. These M10 scabbards come directly from the manufacturer, have never been issued to any soldier and are still in their original factory plastic package.

The US military like all national fighting forces has an extensive history with issuing bayonets to soldiers. While the bayonet has started to fade into the realm of secondary weapons, there continues to be an effort to produce quality bayonets. Like any weapon system, there exists a number of accessories and improvements for bayonets that have been adopted by the US military over the past 100 years.

With the issuance of bayonets, the number one accessory that has been adopted has been the scabbard or sheath. Soldiers, officers, and security professionals know that a bayonet needs to be issued with a high quality sheath or scabbard for a variety of reasons. Primarily the use of a scabbard will protect the bayonet from damage in the field as well as prevent the bayonet from accidentally injuring the soldier who it was issued to. Not to be overlooked a scabbard also allows an effective method of transporting your bayonet when it is not attached to your rifle.

The M10 Scabbard was designed to be the last generation scabbard for the M4, M5A1, M6, and M7 bayonets. In particular the M10 was issued in massive numbers with the M7 bayonet. This was the first time a scabbard was made of polymers and the results of using polymer was praised by soldiers for being stronger and lighter than previous scabbards. Now that the bayonet has evolved into a fighting knife, classic bayonets and scabbards are becoming more collectible than ever before. You can now add this authentic M10 scabbard to your collection and it will only increase in value over the years.

Overall Rating
Bought for my m7 bayonet
Review by William 8/1/20
Great price and fit. overall good product
Overall Rating
As new in original wrapper.
Review by Mike 9/16/19
M7 and M3 trench knife fit snugly. Excellent quality.
Overall Rating
Good Deal!
Review by Nevermind 1966 7/22/19
Brand New in Package, real deal not a knock off. Already had a used one but this is New!