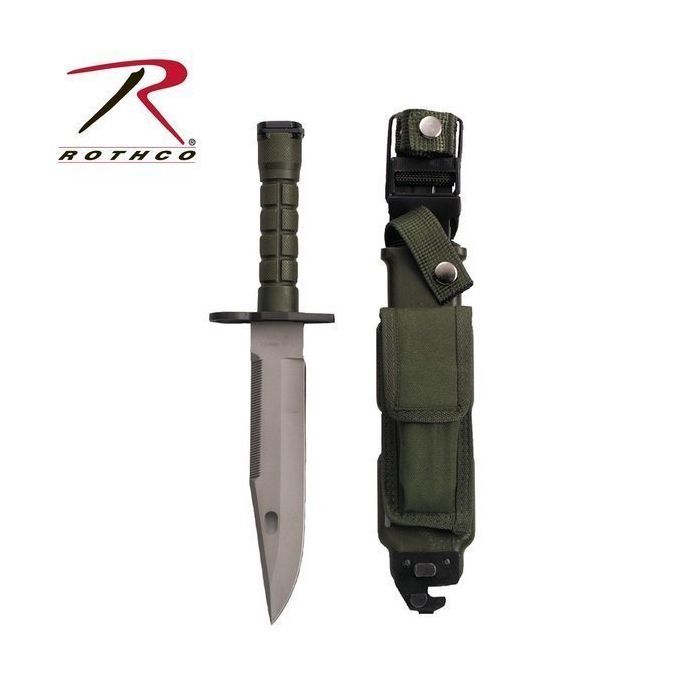 The M9 Bayonet was the first multi-purpose knife that was adopted by the US Military that could also be used as a bayonet. The M9 started a trend in bayonet design and development that has continued to advanced designed like the USMC OKC3S bayonet which doubles as a Marine fighting knife. Tthe M9 has seen service and deployment in 13 national police and military agencies around the world and is still in use today by the US military.

Notify me when this product is in stock
SKU N2134

The M9 bayonet is, at its heart, a bayonet intended for use alongside the AR-15 rifle platform. As noted, it is much more than a bayonet, also suitable for use as an edged melee weapon, general field use, cutting wires and sawing. Surprisingly, the M9 bayonet is also compatible with any Mossberg 590 Special Purpose shotgun.

The M9 bayonet offered here is a Taiwanese version of the M9 bayonet that seeks to replicate the current design as closely as possible, and is easily attached to the bayonet lug on any AR-15, M16 or M4 carbine. It is characterized by a stainless steel blade that measures approximately 7 inches in length. The uniquely designed blade come pre-sharpened, and features a serrated "saw-back" spine used for sawing alongside traditional serrations on one quarter of the edge. When combined with its ergonomic, thermoplastic grip, the bayonet measures approximately 12 inches in length.

Also included with each M9 bayonet is a scabbard that can be configured with the blade to form a pair of wire cutters. This heavy-duty, synthetic scabbard features snap fasteners designed to secure the bayonet as well as a metallic belt clip that offers easy transport. Also noteworthy is the inclusion of a pistol magazine pouch that offers users the ability to carry a single, standard-capacity pistol magazine.

Quality
Price
Value
Review about what weapon.
Review by Ronald 5/17/14
Now I really could not put it on my AR-15 because of the limited space, it is large. But it sure does the job on my Daewoo-200 Korean semi Auto.
When back in stock, you might check out other rifles it might fit or carry it as a clean your finger nails knife. :-) The scabbard is worth the price. I gave it a 4 on quality because I do not know metals. Might be a 5?
Quality
Price
Value
good knife
Review by igor 8/28/13
easier to sharpen than the original M9
Quality
Price
Value
good knife
Review by igor 8/24/13
sharpen's better than service issued one
Quality
Price
Value
Copy of an M9 but questionable
Review by Richard 8/18/13
Product arrived. Blade was sharp and in packing grease. It is doubtful the blade is stainless steel if it is in packing grease.
Blade wasn't mounted correctly in pommel and stuck up 1/16-1/32 too high so flash hider couldn't clear the barrel ring.
20 minutes of filing later it fit, but it is not out of the box ready to use.
I did not return the product as it would cost 1/2 the cost of the knife for shipping and restock fee. It fits the barrel now, but I do not recommend the product.