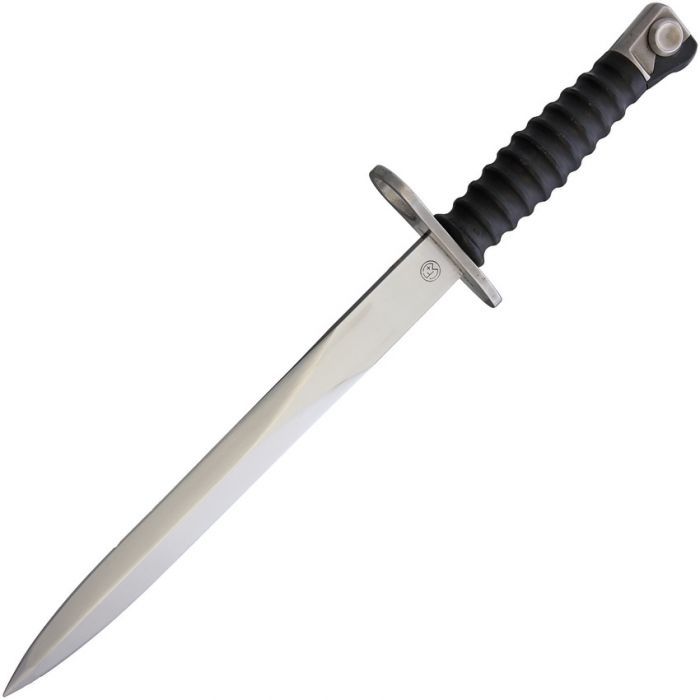 The Swiss 1957 Bayonet with Scabbard is an authentic Swiss military issued bayonet. Originally designed for use with the Swiss STG57 rifle these Swiss quality bayonets are so refined they can be used as a stand alone knife or dagger. Each bayonet is marked by the manufacturer and is uniquely Swiss in the design and finish.

The Swiss 1957 Bayonet was the standard issue bayonet for the Swiss SIG STG57 rifle. This legendary Swiss rifle was on the front lines issued to every citizen soldier in Switzerland during the height of the Cold War. Each rifle was accompanied by this Swiss 1957 bayonet which could be either attached to the STG57 rifle or used as a hand-to-hand combat fighting knife.

Price
Value
Quality
Good buy
Review by Stewart 1/31/21
Very nice! You can never have too many bayonets and this is one everybody needs.
Extremely well made of the highest quality materials. At this price I will purchase more. Thanks Keep Shooting for supplying high quality military surplus at good prices,
Price
Value
Quality
It brought my grandfather to tears
Review by Thomas 11/16/15
I bought this for my Grandfather who was a member of the Swiss army in the Mountain Rifle battalion 6 (Gebirgsschützenbataillon 6) from 1963 to 1983. When he moved to America in 1990 the only thing which he brought with him to this country was this exact bayonet (plus his wife, but still!). SO anyway when me and my sister were younger we would go on camping trips with him and every time that bayonet was the one thing that never failed to come on the trips. Long story short when I was 18 we were out in the lower region of the Appalachian mountains when the knife broke in half, that was the only time I have ever seen my grandfather mad to this day. But, afterwards he just played it off and bought a normal hunting knife but he never used it in any of the ways that he would with his old PE57. So, when I saw this the only thing I could think of was getting my grandfathers old friend back. The moment it got in I took it straight over to him, and the joy on his face was like he had just been reunited with someone who had died a long time ago and just now made it back. Thank you Keepshooting you have my business for life.
Price
Value
Quality
1# quality bayonet for the money!!
Review by chris 3/23/14
I got a victorinox made bayonet. I have both wenger and victorinox pocket knives and the quality of metal is very high standard. these bayonets are the real originals not a cheap Chinese made reproduction. Had my bayonet in 3 days. Keepshooting has always done me right. Whenever I need/want military surplus they are number one in my book.
The bayonet is in new condition!

Quality
Price
Value
Great Bayonet
Review by Jacob 9/3/12
Mint condition knife, great buy
Value
Quality
Price
Well worth the price.
Review by David 7/23/12
I bought one of these bayonets from Keep Shooting and it exceeded my expectations. Not only was the quality and condition of the bayonet excellent, it also came with a frog. Mine was marked "W" - manufactured by Wenger - just like my Swiss army pocket knife. One of the nicer bayonets I have bought for a very reasonable price.
Quality
Price
Value
High Quality
Review by Steve 3/17/11
This bayonet is made of the finest quality i have a collection of bayonets and Kabars and this is one of the nicest i own and one of the most well made even compared to the Germans and the Russians. I got a V for Victor-inox which is what i wanted fast ship. Thanks keep shooting for the great deals i will be back.