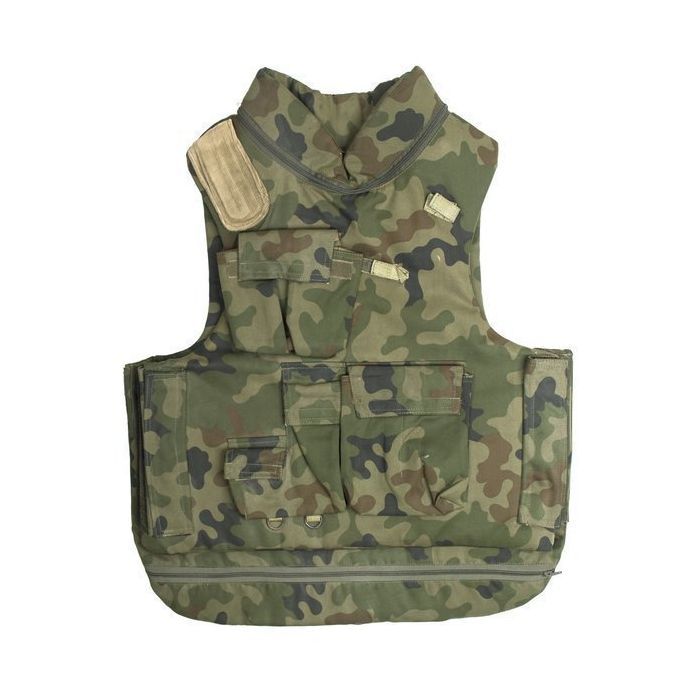 The Polish Army Flak Vest is a Kevlar vest made in Poland. This flak vest was made specifically to meet the needs of soldiers in the Polish armed forces and this style of vest was used extensively in Kosovo.

The Polish Army Flak Vest is a large tactical body armor vest that was designed for soldiers on the battlefield. With a coverage area that includes front, rear, and high neck protection this is not your ordinary military flak vest. When soldiers wore this flak vest, it was clear that they were being given a protective vest that was more robust and had a higher protective layer than previously issued flak vests.

Designed and manufactured by Moratex who operates the Institute of Security Technology in Poland, this vest had the best and brightest of Poland's research community collaborating on the design and choice of materials. Moratex prides itself on being the innovator in the body armor industry in Europe and has produced the very best body armor for the Polish armed forces and other NATO aligned states.

Overall Rating
Quality Body Armor at a Great Price
Review by Speed 9/16/17
I was surprised at the condition of the vest, VG-Excellent and completely intact. All the fasteners were little used and functioned well; nothing was broken. The camo pattern/color is bright, not faded. There was a slight musty odor, which can be eliminated by one afternoon in the direct sun. This XL vest fit my 46 chest perfectly; am reasonably fit from fifty years of running. The design is impressive and all business.
Overall Rating
Suprising
Review by Ian 6/12/17
Ordered a small, fits great (6.0' 145lbs). The girth is adjustable about 6" in two positions (that's what those ribs on the outer edge of the vest are in the picture, it's got velcro on the backside and clamps around the piece that comes from the back).
Color was a bit deeper than the picture, the vest shows some wear (nothing crazy, just a fray here and there and some small holes). Well within the realms of reasonable surplus.
In addition to the knife straps and pockets on the front (which are generously sized) there are three additional pockets on the back; a very large one which I would assume is for a Medkit (although it fits an MC-1 with an extra filter, or an MP4 in it's carry bag perfectly); a medium/large pocket, and a pocket for something that would have a handle sticking out the bottom, like an entrenching tool. There are also some d-rings in an inverted triangle and belt loops on the back.
Mine has a traditional triangular codpiece on the front, which is better for sitting than the full-width shown in the product picture.
The liner goes up into the collar for more protection and is one solid piece; front and back; top to bottom.
Overall a very well built piece. I haven't tested its ability to stop the originally intended projectiles, but it will be perfect for airsoft wars, cosplay, re-enactment, and what-have-you.
Overall Rating
Awesome
Review by Marc 11/10/15
Mine came in the mail today, and to my surprise it fit me! I ordered a small, not really expecting it to fit, but it did. I'm 6'0 and 180lbs.

It's a little faded, but that can be seen in the pictures and it's nothing I didn't expect. Everything is intact and I couldn't be happier. Thanks!