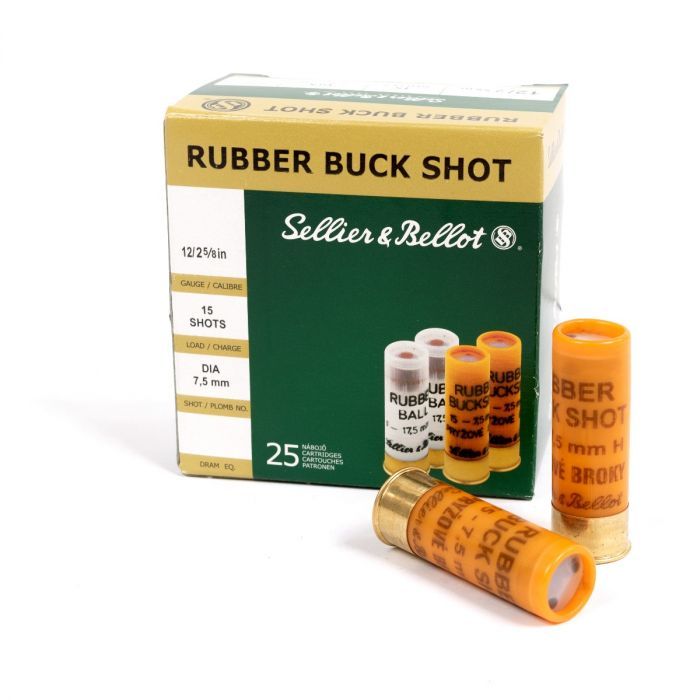 Developed as a less-than-lethal load, this ammunition, like all ammunition from Sellier & Bellot, is marked by its accuracy, reliability and superior performance as compared to other leading manufacturers' less-than-lethal loads. Each box contains 25 12-gauge shotgun shells – each of which measures 2 3/4 inches in length and contains 15 pellets of double-aught (00) rubber buckshot.

Notify me when this product is in stock
SKU N34354

Sellier & Bellot is an experienced ammunition manufacturer that was established in 1825 that today finds its headquarters in Vlašim, Czech Republic. Today, the company is a subsidiary of CBC, one of the world's largest manufacturers of small arms ammunition, and produces a range of pistol, rifle and shotgun ammunition in a wide range of different calibers, including the ever-popular 12-gauge shotgun shell.

Each box of S&B Rubber Buckshot contains 25 shells that are loaded with 15 rubber pellets. These shotgun shells are ideal for a less lethal means of ending a hostile attack, breaking up a riot, or a less lethal force to deal with large predatory animals. Designed by S&B for the Czech Army, this less lethal load has become a civil combat standard for law enforcement and military forces around the world.

Overall Rating
Great non lethal buckshot
Review by Mo 8/4/14
Great price on a great less than lethal alternative for home defense, good stuff!!
Overall Rating
Great in Bear Country
Review by Chris 9/10/13
Rounds are a great for scaring off black bear. Would also be great in the house if an intruder came in. Another Great product.
Overall Rating
Worthwhile Investment
Review by Henry 11/27/12
Less lethal ammo for home defense means stopping power w/o being hauled off to jail...normally. If the first shot with this doesn't stop them then lethal force might be justified. Bear in mind, at close range, this ammo can be lethal, so be careful!
I keep this and rubber slugs loaded in my 12 gauge along with normal shot for home defense. Would be useful for warding off coyotes and such too.
Overall Rating
Warning Buckshot.
Review by Bobby 6/2/12
Fast UPS shipping. Perfect for crowd control!
Overall Rating
Finally a shotgun shell anyone can use
Review by AvidShooter 4/16/12
These rubber buckshot rounds are perfect for people that want to be able to defend themselves, but couldn't bring themselves to shoot and kill someone. They are just as reliable as real steel buckshot and have the same basic spread pattern. Also about a quarter the weight of steel buckshot, great for home defense or on the go.