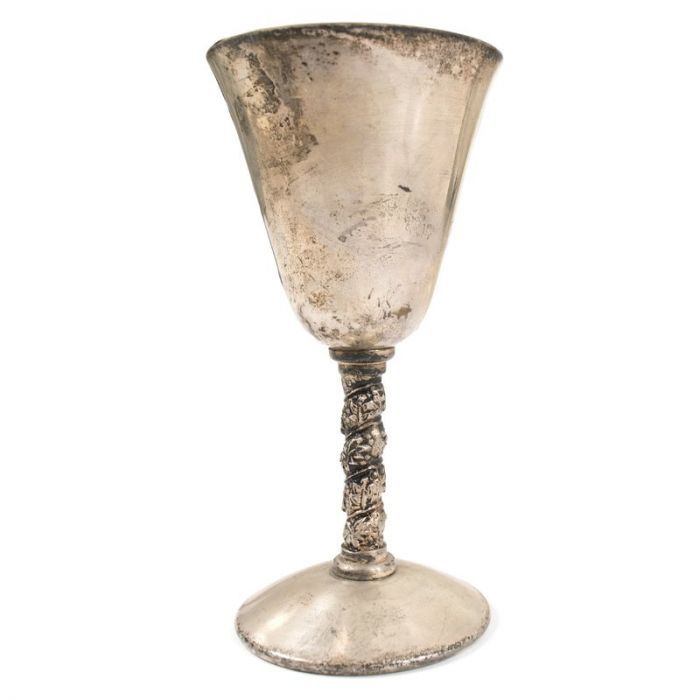 The Sharon Tate and Roman Polanski Wedding Goblet is an authentic piece from the Sharon Tate Estate Auction. These silver plated brass goblets were part of a set of four that were gifted to Sharon Tate and Roman Polanski for their wedding. One can imagine how happy both Sharon Tate and Roman Polanski were on their wedding day, with neither knowing how their lives would be forever changed on August 9, 1969 a little less than 18 months after this joyous occasion.With no less than three movies being produced for release in 2019 to mark the 50th anniversary of the Helter Skelter murders, the level of interest in all things related to this turbulent event in American History is reaching record levels. These wedding goblets were part of the belongings that were packed up by Col. Paul Tate at the home Sharon Tate lived at with Roman Polanski where she ultimately lost her life - 10050 Cielo Drive. Col. Paul Tate was in military intelligence, and personally packed up all of Sharon's belongings to give him the opportunity to look for evidence that may have been missed by the police at the crime scene.This goblet is for advanced collectors who recognize the historical importance of the events of August 9, 1969. While the Tate family was directly impacted by the murder of their beloved daughter, the country experienced a significant blow to our sense of security. Doors were locked at night going forward, home protection was seen as paramount, and the sense of security that most felt was never the same.

The Helter Skelter murders by the Mason Family have left an impression on people around the world. Now fifty years after the murders, there continues to be growing interest in the events and how they unfolded. Now you can own a very special artifact that was with Sharon Tate on the happiest day of her life, when she married Roman Polanski and on the worst day when she met her end at the hands of the Mason family.