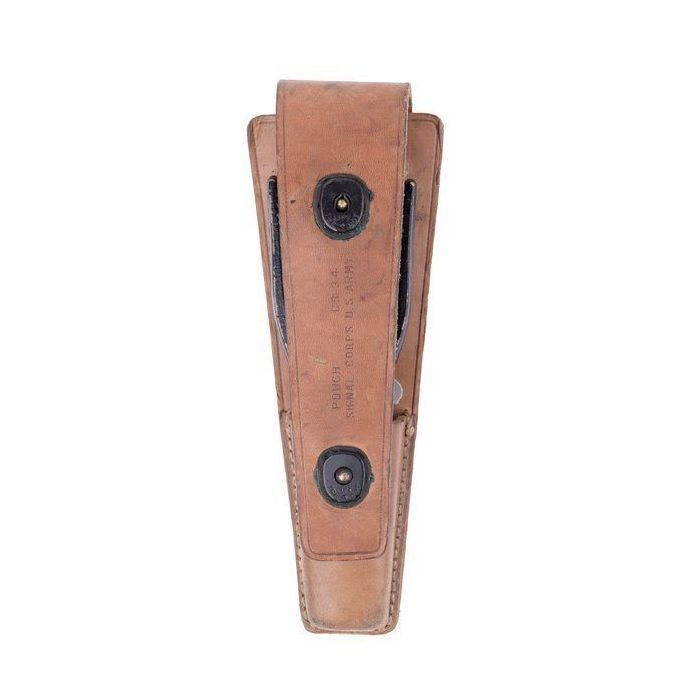 The US Army Signal Corps TE-33 Tool Kit has been fielded since World War II and continues to be prized by collectors and radiomen. Starting with the CS-34 leather pouch that holds the tools, the TE-33 harkens back to an era where tools were designed for skilled professionals. With the TL-29 electricians knife and TL-13 pliers that are found inside the CS-34 pouch, a Signal Corpsmen would have virtually everything they needed to maintain their radio equipment.

The US TE-33 Tool Kit has seen service in virtually every part of the world and has remained essentially the same since it was first issued. This tool kit was designed at a time where simple solutions were ideal and perfection was achieved often. Ultimately the TE-33 is ideal for use by soldiers who were responsible for setting up and maintaining things like radio equipment and Signal Corps facilities.

We have original military TE-33 tool kits now available for sale that are complete, including both the TL-13 pliers and TL-29 knives. These tools were produced post-WWII and came to us sealed in a wooden crate dated 1958. They were produced for use by NATO forces in Europe and for Signal Corps operations in the Korean War but were never used. Most of the TL-13 tools were preserved by dipping in beeswax and all of the pouches show signs of verdigris which is further evidence to the age of these vintage original pouches. The TL-29 knives feature wooden panels and are marked appropriately for the era, and all the tools fit perfectly into the CS-34 pouch.

Overall Rating
Works as intended
Review by Former Signal Corps Soldier 9/13/19
Forval was actually manufactured in France for French forces to mimic U.S. tool set. They even used the same nomenclatures. Good representation of early reproduction. No telling if they were issued to U.S. forces while overseas. Mine came with missing back plate on flap snap and did not have Signal Corps U.S. Army stamped on the flap as depicted in photo, only Forval CS-34
Overall Rating
Nice, new original set
Review by Steve 9/19/16
It would compliment any collector of Signal Corp items. I am an electrical contractor so grabbing vintage tools are always something I look for. It was hard to compare for value since a lot of sets are used or some new and repro combined so all new was what made me get it.
Overall Rating
Quality Item As Described.
Review by Dan R 9/15/16
Onto my BO bag it goes! Easily attached to outside of bag. Dikes are in wax. Knife and carrier are as new.