The Battle of the Bulge Graphic Novel - Willy Vassaux 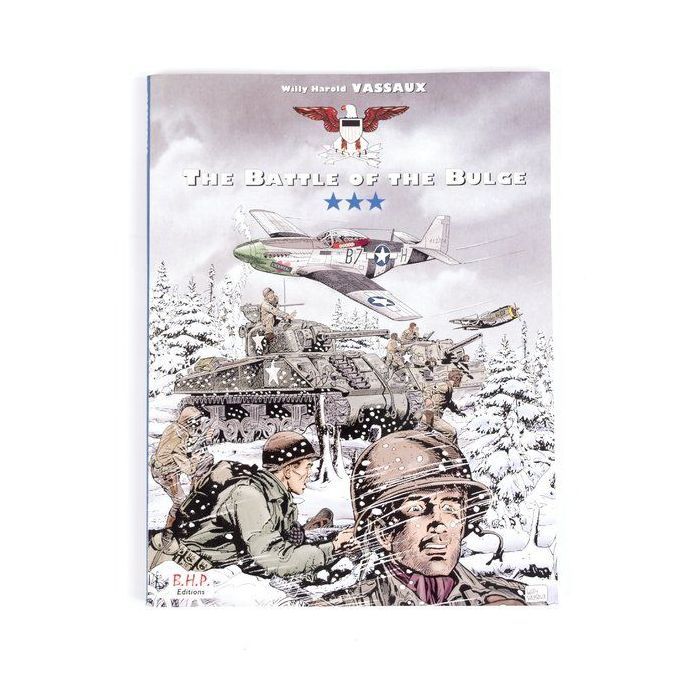 Battle of the Bulge Graphic Novel

5 1 (1)
For fans of graphic novels, it may not get any better than this book by Willy Vassaux. Telling the story of the legendary Battle of the Bulge, you will be completely hooked from the start when you see how well the artistry captures the historical events surrounding this battle. History through comics where the real characters, events, and personalities far exceed any fictional graphic novel.

It is December 16, 1944. Adolf Hitler orders the launch of a fierce counter offensive in the Ardennes in a last-ditch effort to save the Third Reich from defeat. It's the beginning of Operation Wacht am Rhein (Watch On the Rhine). For more than 45 days, allied troops battle heroically against a German army determined to regain the river Meuse and the port of Antwerp.

With his garrison encircled in Bastogne, Brigadier General Anthony McAuliffe is visited by German envoys who call for his surrender. The american general's reply is emblazoned in history: "Nuts!" The German riposte is not long in coming, subjecting Allied soldiers to an assault of a ferocity seldom qualed. At the end of a long siege in particularly arduous weather conditions, the American troops  are liberated by the valiant intervention of General Patton's armored divisions.

Willy Vassaux - a devotee of history and a scrupulous draftsman with a flair for the motion picture layout - brings to life here the complete story of the last great enemy onsalught before the capitulation. The account of this battle - the bloodiest, but also the most decisive which the Americans, after D-Day, fought on the European western front during World War II - is presented in a single 96 page volume. Each of its illustrations bears accurate witness to the tragic and glorious hours of several hundreds of thousands of men during that merciless winter of 1944 in the Ardennes.

Nuts! - The Story of the Battle of the Bulge in pictures...so that it may never be forgotten.

Overall Rating
Battle Of The Bulge
Review by Guns 3/24/19
Verified Buyer
I was pleased with my copy of the Battle Of The Bulge graphic, the art-work and coverage was superb. I searched specifically for any reference to the 106th Inf. Div. The reason for doing so was because my step-father was a member of that unit. He was also nearly killed. He always referred to the 106th as the 'hungry and sick". This because many men died in their foxholes, many froze to death. My dad was picked to run a tank destroyer; a Panzer killed it, he received a head wound. Was disappointed to find no ref's to the 106th. Inf. (E.O.M) Richard Kobel, GySgt USMC Ret.