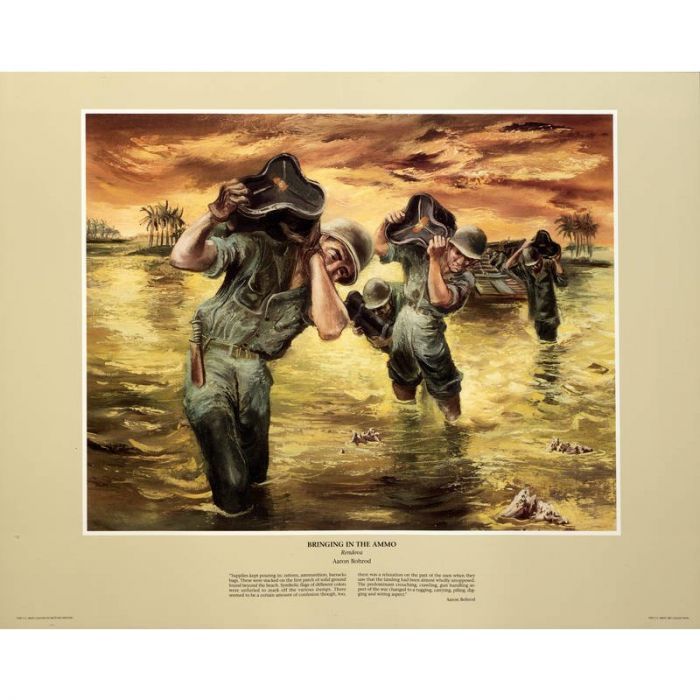 5 4 (4)
The United States entered World War II as an active combatant in December 1941 are the Japanese attack on Pearl Harbor. Initially, America concentrated on building up industrial production capability and military strength. These reproductions from the U.S. Army Art Collection depict some of the activities from that period.Each of the prints includes the name of the work, the general location it depicts, and the name of the artist. The extended caption on each print provides background information on the subject matter illustrated. The artists whose work is represented here actually witnessed the scenes they portrayed, and in some cases the words in the captions are those of the creator of the artwork. In others the caption simply helps put the scene in context.The World War II art belonging to the Army came from a variety of sources. Much of it, including nine of the paintings in this series, was the result of a program whereby Life magazine hired artists as war correspondents to produce a pictorial record of the war. The Army also had a number of artists in uniform, one of whom is also represented in this set. After the war the work of both groups was entrusted to the care of the Army.At the beginning of the war American factories and seaports shifted to around-the-clock operations to handle the production and shipment of materiel needed overseas. As the industrial base prepared for war at home, the Army engaged in active combat operations in theaters around the world. Each engagement provided the Army with additional experience which it put to good use as it built up the strength and confidence which eventually enabled it to prevail.

This print set was designed and produced by the U.S. Army Center of Military History to commemorate the fiftieth anniversary of World War II. The pictures and words are in remembrance of the sacrifices and accomplishments of all the men and women who served in World War II. Consisting of ten ready-to-frame prints produced to the highest stands of quality with the original paintings residing in the U.S. Army Collection, this print set represents a tremendous value that will be appreciated by all who sees it. Printed sets produced for historically important milestones by the US Army capture a time in our nation's history that deserves to be preserved, protected, and passed down to generation after generation.

With each print you will find the reproduced painting in the center of the print. Around each image is a thin white border with a matte-style setting that provides an area to print the name of the piece, the location it depicts, the artist who painted it, and a caption from the artist. The caption is very important as it describes the background information on the subject matter that is illustrated and in some cases the words of the artist who created the work. Any craft store that does framing (Hobby Lobby, Michaels) would be able to professional mount and frame these prints to give you an amazing set of art to hang in your home or office.

When the U.S. Army had these print sets produced in 1992, the cost per set of ten to the Army was $50 so the price we are offering these authentic and historically important print sets at represents another tremendous value that you'll only find here.

Once opened, I am impressed by the quality of the art prints.

Taking these to Hobby Lobby for framing this week. Based on past projects I can tell these will look perfect on the wall after being framed.

I now see there are follow on sets that the Army made. I hope I can find them to really have an impressive display.

Overall Rating
I bought a box of these
Review by MikePA 12/28/18
Verified Buyer
I work at a bar that has a monthly veterans meeting. I decided to buy these for gifts for the guys who defended our nation and take care of me with good tips.

If you have not seen these, the pictures on the website do not do them justice. These are high quality print that look amazing when you pull them out of the envelope they came in.

If you like war stuff, you will love these. Incredibly good buy.