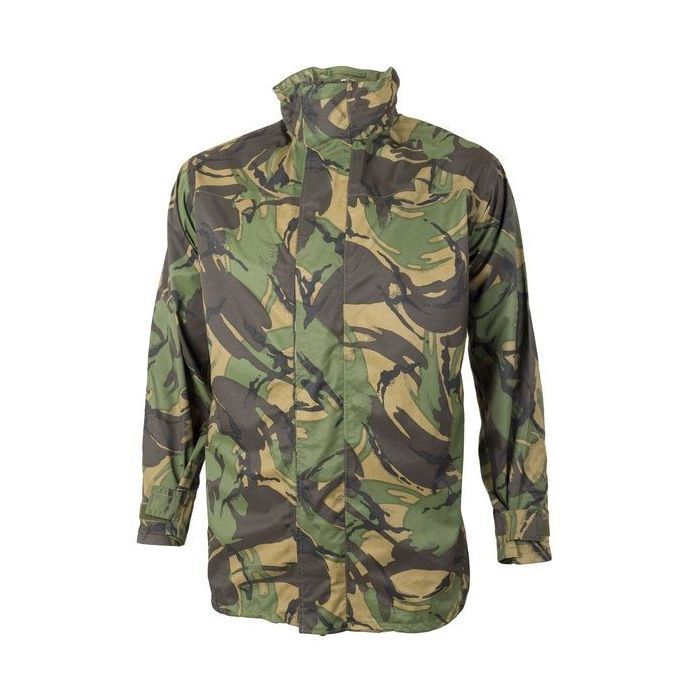 (0)
The British Army MVP Woodland DPM Combat Jacket is a British Army issued jacket designed to offer protection from the elements, specifically storms that would include heavy rain. With construction of the jacket made using Moisture, Vapour, Permeable (MVP) materials, water is kept outside of the jacket while allowing heat to breath through the fabric. The end result is a first rate rain jacket that does not leave the wearer feeling overheated or cause any issues with sweating while it is being worn in a warm but rainy climate. This authentic British Army combat jacket could quite possibly be the ultimate rain coat, and we've got them available by size to ensure a perfect fit when you purchase your jacket.

The British Army, like all NATO-aligned forces, has produced some extremely nice personal equipment to allow their soldiers to operate in any environment. One of the most demanding environments would be operating in wet weather, as rain will not only cause physical issues for the soldier but also for virtually every piece of equipment that is being carried into the operating area.

Now you can enjoy the same protection from wet weather that soldiers in the British Army have. This authentic British Army MVP Combat Jacket is a currently-issued water resistant combat jacket that will protect you from wet weather and will give you the added benefit of the Woodland DPM Camouflage. Woodland DPM camouflage blends quite well with most wooded parts of North America and looks very good even when being worn in an urban or city environment.