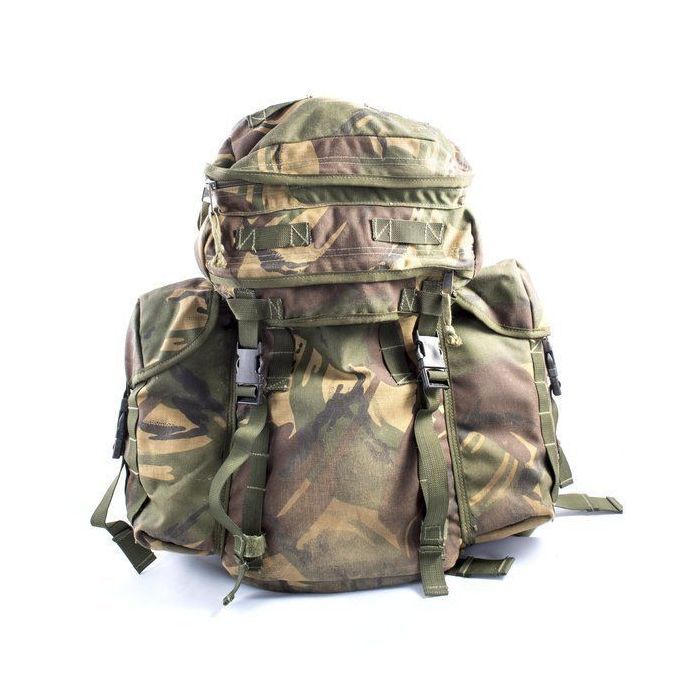 The British Army Woodland DPM Patrol Pack is a 30L capacity 1-3 day assault pack that is in use by the British Army. Soldiers in the British Army commonly refer to this as the NI pack, short for Northern Ireland pack, where most soldiers first experience using this patrol pack.

With a good 30L capacity, this patrol pack would be the equivalent of a typical 1-3 day assault pack for carrying volume. With a host of features in addition to this ideal carry volume, the British Army Woodland Patrol Pack is ideal for virtually any situation. With the design of this pack being geared towards patrol type action, this pack would be ideal for overnight hikes. We have had customers purchase this pack for camping gear and all have raved about how tough the patrol pack is and how it holds more than enough gear for even an experienced hiker.

Having seen service in the British Army, each of our 30L Patrol Packs has a story to tell. Soldiers in the British Army have served along side of American soldiers in virtually every modern military action. Your pack may have been in Kosovo, Iraq, Afghanistan, or even on the Arctic Circle where British Royal Marines are stationed to prevent a Russian invasion of Europe through Norway. You are not just buying a backpack, you are buying a piece of British military history that has a story to tell.

Overall Rating
Nice, large pack
Review by Kenneth 7/13/16
They call this a patrol pack (says so on the label) but it's actually quite large. The PLCE rucksack is perhaps two or three times as large, though. The one I received looked exactly like the one in the photos and all buckles and zippers were functional and nothing was missing. The pack has a padded back but no frame, so it's relatively lightweight. It is made of a very tough fabric, rather tougher than a typical commercial pack. It has handy little pockets in the lid and very large side pockets (non-removable). Like all contemporary packs, it has easily adjustable shoulder straps, a waist belt and easy to open pockets and main flap. An excellent value at twice the price.
Overall Rating
Great pack at a great price.
Review by Douglas 6/23/16
I was very surprised when I received my pack to get one with hardly any wear. It is in great shape with no repairs or defects. The pack is well made, with heavy materials and well designed. It is also a very handy size.
It is not mentioned in the description, but the side pockets have a PVC type coating inside, along with a drawstring enclosure under the pocket lid to keep water out. Great design!
This is a great pack for the price. Don't hesitate to pick one up.
Overall Rating
Excellent Patrol Pack - In need of small repairs
Review by 53GR 7/29/15
British Army patrol pack fixes all of that. I have mine packed as a summer mini-rucksack, and it holds my equipment well. The side pockets are extremely useful, being large enough to fit a 3L soda bottle each. I have a 3L Camelbak in one and my food in the other. Rope, poncho liner, spare clothes, poleless litter (for use in making a hammock, extra poncho, medical bag (a re-purposed PLCE respirator bag), radio, and other odds and ends go easily into the main compartment. You can overstuff this sucker if you want to, unlike a book-bag.
Now it is a used bag. Mine came with a couple of flaws. The top drawstring on the storm collar was missing, which was time-consuming to replace. Not such a big deal, as long as you have spare 550 cord. The belt buckle needed to be replaced. The male section of the buckle was missing and the female section was cracked.
If you want a nice piece of British military history that doubles as a great hiking pack, get this. Just have a few spare buckles handy.
Overall Rating
Awesome day pack
Review by David 7/17/15
Not yet field tested. It more like a Medium ALICE pack. I like the two huge side pouch. The quick-release make it easy to open and close the pack. Very well design. Don't miss it again if this becomes available again.