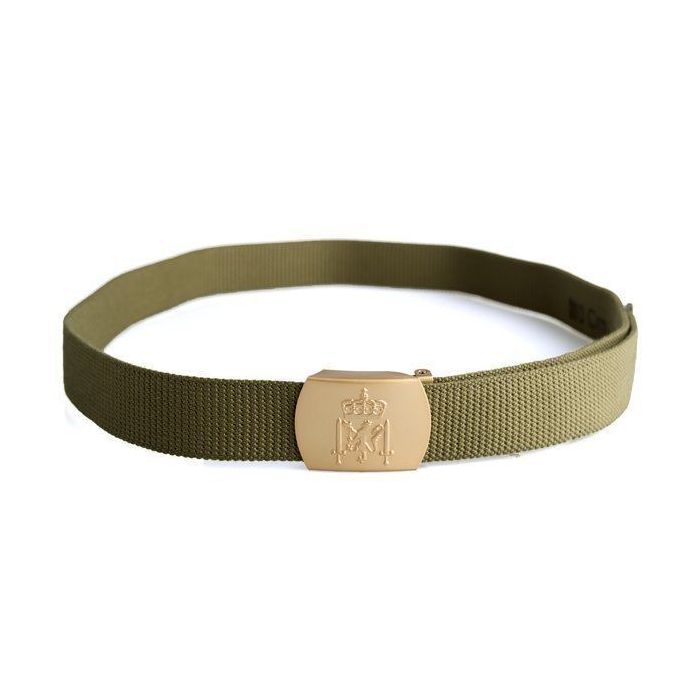 The Norwegian Army Officers Belt is an authentic belt from the Norwegian Army. These stylish army officer belts feature an olive drab green cotton belt and a gold colored buckle that has symbols of the Norwegian Royal Army. With this belt being designed similar to civilian belts, you can wear it with your favorite pair of jeans for a unique look that is not overtly military.

The Norwegian Army is one of the smaller standing fighting forces in Europe. With just 12,000 troops, authentic Norwegian Army surplus has been only available in very limited numbers. These belts represent only the forth item we have been able to import in any quantity and is one of the more uniquely Norwegian items. The belts are issued to soldiers in the Norwegian Army as part of their field uniform and would also be used with their service uniform.

You can now own this authentic Norwegian Army belt and use it to complete a unique and stylish look. This style of belt is similar to many civilian made belts, yet it features the insignia of the Norwegian Army on the buckle. This insignia could easily be confused for a "Game of Thrones" style belt buckle or an offering from a higher end fashion line trying to capitalize on the popularity of the series.

Overall Rating
Nice belt
Review by J Kurtz 7/1/21
Lg/xL (110cm) nice fit for my size, buckles Ez once you get used to it , looks smart as business casual or daily use , well made
Overall Rating
Nice buckle, belt too small.
Review by Max Hoffmann 9/11/20
The buckle alone was worth the purchase: unique and well constructed. The belts, however, are mislabeled, apparently by the Norwegians themselves. I bought a large and an XL, and the labels say that one is 90 centimeters, the other 120, but the difference between them is only about 2 centimeters. I can normally wear a 120-cm belt, but not this one.
Overall Rating
Brand new
Review by Terry 1/21/17
Brand new. Cool looking buckle. Looks good on nice pants.