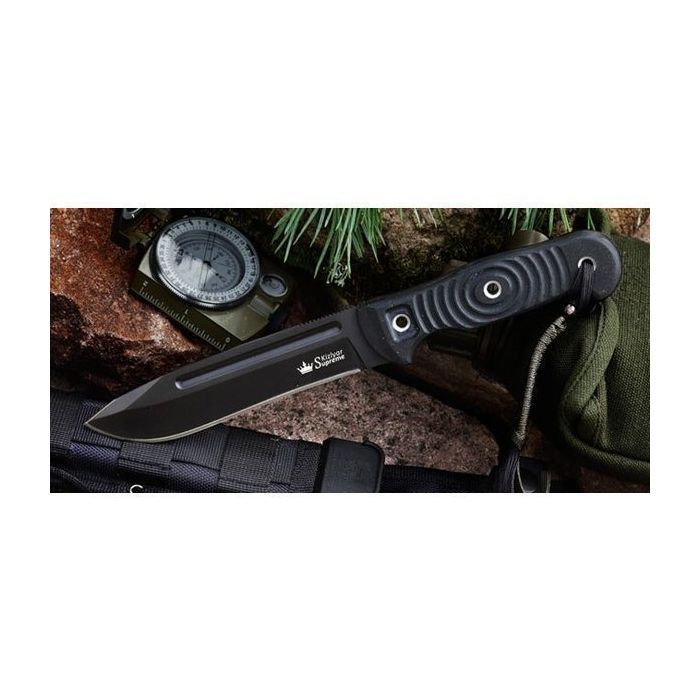 The Maximus from Kizlyar Supreme is a Russian made hybrid hunting / combat knife. When going out into the bush you need a knife that is capable of doing everything or else you end up carrying multiple knives. This is where the design of the Maximus excels as it can be used for everything from dressing game to dealing with aggressive threats you may encounter.

The Maximus from Kizlyar Supreme is the one knife you'd want strapped to your belt when you are in the back woods or bush. Considered by Kizlyar to be their answer to the Camp Knife question the Maximus performs in any role you use it in.

The blade on the Maximus is designed to be powerful. With a wide blade that features a slightly concave grind, following up into a false edge at the tip the Maximus excels at penetration. There is a fuller that runs 3/4 of the length of the blade to reduce the weight while allowing the spine of the blade to remain thick.

The included Maximus sheath is designed to offer you multiple carry options. It has front and rear Molle compatible sections to allow you to carry additional gear attached to the sheath. There is also a full 1.5 meters of black paracord connected to the sheath that can be used in the field or in the event of an emergency.

Quality
Price
Value
Wow
Review by Zachary 4/15/17
I have wanted to own this knife for a long time. Mine came with a black scabbard, and funny enough the bead for the 550 cord on the knife handle was pink! VERY solid knife. I am glad to have my very own, and looking forward to taking it with me when I go camping this summer.