In 1964, Sturm, Ruger & Company, Incorporated, commonly known as Ruger, began production of a semi-automatic, rimfire rifle. They called it the Ruger 10/22. Since then, the Ruger 10/22 has become, inarguably, America's favorite .22 LR rifle with millions sold. What could possibly make the Ruger 10/22 so popular? Well, it is probably some combination of its low price, easy handling, high performance, negligible recoil and dirt-cheap ammunition. The fact that it is so modular and garners unprecedented support from third-party manufacturers does not hurt either.

Fast forward nearly 50 years and Ruger is still sitting pretty with their 10/22. In fact, they are even reinventing it. The recent introduction of the Ruger 10/22 Takedown turned the arms industry on its ear – much to the delight of everyone. As always, Keepshooting.com had to get in on the excitement. We ordered a few of the new rifles, and as much as we would love to keep them for ourselves, we are offering them to you.

The Ruger 10/22 Takedown, like all other 10/22 rifles, is a semi-automatic, rimfire rifle chambered in .22 LR that utilizes a blowback system of operation. The difference, however, and this is where things get really cool, is the ability of the 10/22 Takedown to be broken down into two subassemblies for unheard of portability. It even comes with a Ruger backpack-style carrying case as well as the famous 10-round rotary magazine.

Our first shipment of Ruger 10/22 Takedown rifles sold out before they were even listed online. My suggestion is to grab yours while you can – available now for just $329.95! 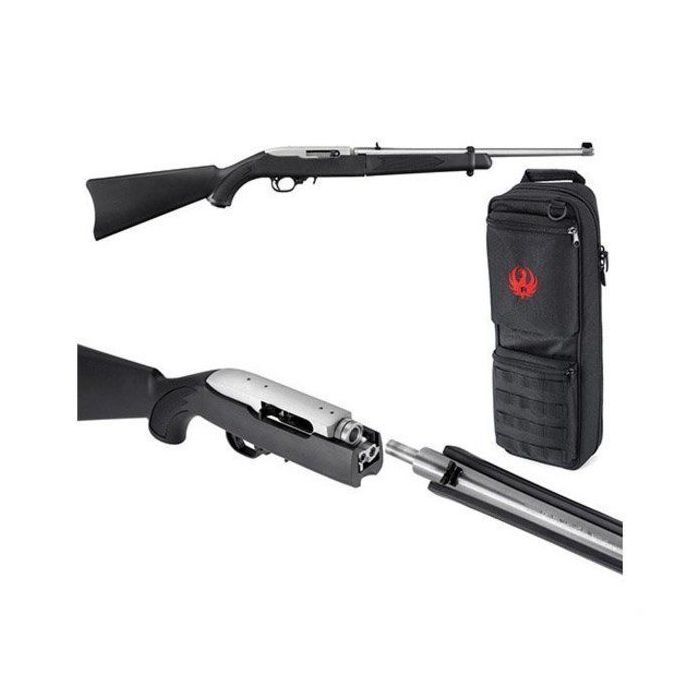 There is so much to be said about the Ruger 10/22 Takedown that I am just going to jump right in. No history. No jokes. Just the facts.

As noted, the Ruger 10/22 Takedown is a semi-automatic, rimfire rifle chambered in .22 LR that carries the unique capability of being broken down into two subassemblies, which is probably the biggest selling point of the rifle. You could, however, argue that the fact it is a Ruger 10/22 is a large enough selling point on its own, but I am sure you want to hear more about the "Takedown" part. You know me – I always deliver.

The hallmark of the Ruger 10/22 Takedown is its capability of being broken down into two subassemblies. I keep saying that, but now it is time to tell you what it actually means. The barrel can be quickly and easily separated from the action in order to provide the owner with easy storage and transport. This is accomplished by first locking back the bolt and verifying that the rifle is unloaded. The next step is to push forward a recessed locking lever, which will unlock the two subassemblies. After the lever is unlocked, the barrel assembly should be rotated counterclockwise and removed from the receiver, leaving you with two separate subassemblies. Reassembly is just as simple and returns the rifle to zero to provide uncanny accuracy at all times.

Just as you would expect, the legendary Ruger 10/22 action is back and housed within a rifle that features an 18.5-inch barrel (1:16 twist rate) and an overall length of 37 inches when assembled. The stainless-steel barrel is nestled in a black synthetic stock that has a length of pull that measures 13.5 inches. More impressive is the fact that the rifle includes a clear matte finish and is completely water resistant. Earlier, I mentioned that the Ruger 10/22 is one of the most modular rifles in existence. It is perfect for use with various sights and scopes and includes a combination scope base adapter for both Weaver-style and .22 "tip-off" scope mounts. Other features include the push-button manual safety, the extended magazine release and an iron sight system that features an adjustable rear sight alongside a gold bead front sight. As noted, each rifle includes a 10-round rotary magazine with optimally-angled feed lips to provide for reliable feeds every time. All of this is packed into a rifle that weighs just 4.67 pounds.

The inclusion of a backpack-style carrying case is the icing on the cake. The Ruger bag provides plenty of room for storing your Ruger 10/22 Takedown with a number of pockets and options for storing accessories like magazines, ammunition, optics and more.

There is simply no other rifle that is as versatile and affordable as the Ruger 10/22 Takedown. As noted, our first shipment sold out before they even made it online. As such, we do not expect these to stick around for long. Consider the Takedown for:

Reviews 3
Write Your Own Review
Product Questions
Customer Questions
No Questions
We found other products you might like!
More from Ruger
Copyright © 2002-present United Defense LLC. All rights reserved.