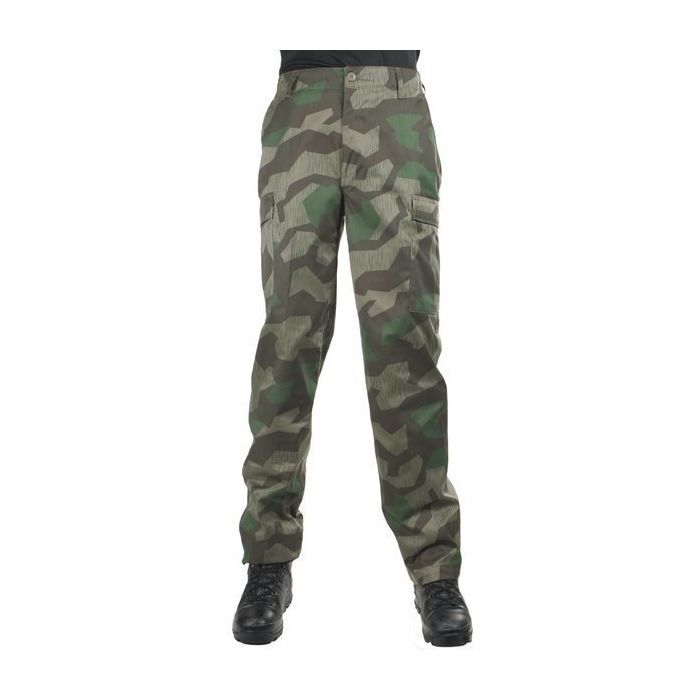 The Splinter Camouflage BDU Pants are a brand new pair of pants from Mil-Tec of Germany. These pants are finished in the unique World War II-era "Splinter" camouflage pattern and are designed after the common military BDU pants. With this camouflage pattern being very rare, you can make a bold statement when wearing these splinter camo pants.

The Splinter Camo BDU Pants from Mil-Tec are a unique blending of old and new. Splinter camouflage is one of the more rare patterns that has not been used by any military force since World War II. Battle Dress Uniform standard trousers are a modern issued design for trousers to be worn by soldiers in an armed force. Mil-Tec has blended both of these traits perfectly and the end result is these Splinter Camo BDU pants.

No matter what you are doing or where you are at, these pants make a bold statement when worn. They do not look overly military to the average civilian as the camouflage pattern is vintage WWII. They do give off the impression of being purpose made and you will likely have those who know the Splinter Camo pattern strike up a conversation. These well made pants will be popular with those who like military theme, unique prints, or street fashion and are built to last.

Overall Rating
Unique pattern to add to collection.
Review by Joe 5/5/16
Well made trousers, these are a breathable fabric so you're gonna be comfortable wearing these . Pattern vintage cool so why not a battle smock or jacket to match, I'd be in line to order Now, just ordered another just now too!
Overall Rating
love them
Review by don 3/28/16
I collect camo clothing, and I was excited to get some splinter camo, even if its not surplus but a remake. The pants are well built, have cargo and regular hip and slash pockets. Not double fabric in the knee and butt area like US BDUs, but the materiel is tough. Also the pattern and color really blend effectively in the woods around these parts. I just wish they had this in a shirt and jacket and boonie hat.
Overall Rating
Standard BDU trousers with a fun pattern.
Review by Frank 3/12/16
These are BDU trousers that are an almost identical match to US Army ones, though the weight of the fabric is somewhere between the Winter and rip-stop Summers.

The pattern is the German one, though, including the "bark lines" throughout. Based on the other review I jumped the gun and ordered two pairs and just handed one of them to my son.

Grab 'em while you can.
Overall Rating
Nice pants
Review by jon 2/20/16
Just got a pair of these and I just put an order in for another pair because my son took this pair. Great looking and comfortable. These are light weight so perfect or Florida.