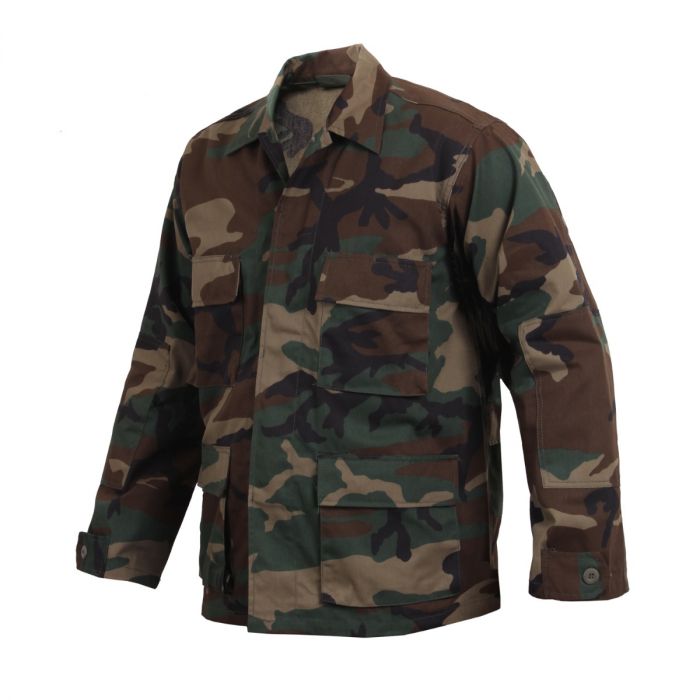 4.45 79 (79)
The Woodland Camo BDU shirt is designed for tactical use with undeniable comfort and unbeatable durability. This military style shirt is made from a rugged and reliable cotton blend with double stitched seams which makes this shirt able to withstand the daily grind no matter how extreme your grind is. Reinforced elbows provide both added protection and enhanced durability making this shirt ideal for virtually any activity. Modeled after the US military standard issue battle dress uniform shirt, you'll find this Woodland Camo BDU Shirt meets your tactical needs as well as features the look you want.

I am a big guy (as the title says), I picked up the 3xl version of this shirt and have been using it almost every single weekend for months, to play airsoft. Running, rolling, sweating, you name it I've put it through it's paces.

The quality is great, and I've washed it multiple times (on slow and cold), no loose threads, no color fading. Just a great durable product (same goes for their matching pants)

I ordered both items larger then my size because I need to layer cloths underneath. But they are made well, seems to be durable so far. Would order again

Honestly some of Rothco's clothes don't fit true to size such as their winter field jackets etc.

I am a size Large 42R (16 1/2 x 33 in dress shirts) ALL DAY LONG, and this shirt fits perfect. The sleeves are just right AND Rothco gives you 2 BUTTON OPTIONS AT CUFF so you can SNUG the CUFF up if you like.

Material: I got the Tiger Stripe traditional Vietnam camo style and the material is VERY NICE, although if Rothco calls this 'ripstop' it must be the ripstop of the 60's ??? because it is definitely not the typical cross-hatch ripstop that I am accustomed to. This is NOT cross-hatch ripstop. It is more of a twill weave in my opinion. The material is VERY NICE and the colors nice and RICH and DEEP. I've seen other stock photos of this shirt and they vary greatly. The colors/fabric of this shirt are definitely not wacky bright.

Also - on back of shirt at mid-back sides are 2 BUTTON OPTIONS so that you can SNUG UP the mid-back area for the normal build dudes. The tailoring of this shirt is definitely NOT SLIM or MODERN cut - it is more AMPLE in my opinion but it's not a deal breaker. Shirt also has COOL DETAILING such as extra sewn 'protective' cuts on the sleeves - very nice touch.

Just what I was looking for

As a bid guy, it's hard to find an all camo suit. Haven't had Woodland BDUs since 1994 when I got out, but these really did the job. comfort, and the right fit.

I bought this for my grandson. It is true to size. Very nice quality. He loves the bdu jacket !

cheap knock off on a great old product

disappointed that Rothco quality is sliding, sizing is odd, fit is not mil-spec, fabric is not quaility & feels cheap & rough on skin

Not the real deal.

Some funky stitching but it's a BDU shirt

It's effectively a shirt, and functions the way it should, however there were a couple funny stitching areas, that again, were still effective stitches, but if you compared them the the identical spot on the mirrored side of the shirt you could tell some of the stitching was like doubled up or restarted or something. Only something you would notice upon fine inspection of the garment though, and through comparing with normal stitching.
Other than that though seems about as good as any BDU shirt I've ever found at like a surplus or something.

Only problem I had is that their (Rothco) pattern isn't consistent, at least for the m81 woodland camo.
Shirt looks great but the pant's are noticeably less saturated in color, almost a faded look. The best way I can describe it is like if you were looking at a swatch of the camo in a photo editor, and were messing with the color saturation slider, the shirt has a normal saturation level maybe slightly higher than middle of the slider, and the pant's are low saturation, with the slider maybe like 1/3rd of the way. But again, these are 20$/30$ BDU's so it is what it is