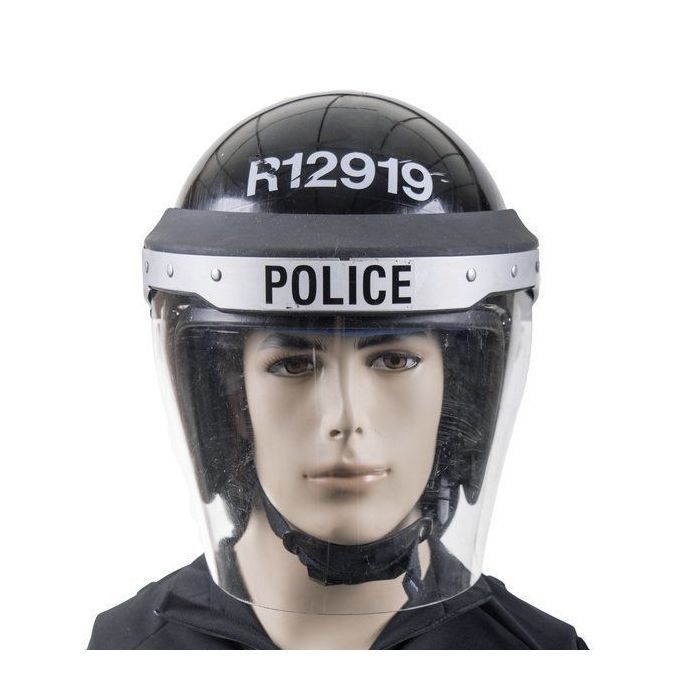 The British Police Riot Helmet is a modern anti-riot crowd control helmet previously used by British police. These helmets are commonly seen being worn by British police who are providing security for demonstrations, marches, protests, and other events. With a full protective visor and industry leading protective properties this helmet is a must-have in today's dangerous world.

The British Police Riot Helmet is an authentic British police helmet made for crowd control applications. These helmets can be seen in news footage from street protests, riots, demonstrations, and marches in the UK where the British Police provide security or response. They are built to the highest standards by companies in the UK who are selected for their ability to uphold the national standards for protective equipment. When police officers strap on one of these helmets they can be certain of being protected by the best helmets made in the UK.

Overall Rating
A good helmet but has some issues.
Review by Brandon 12/25/20
I bought this helmet for Christmas. I opened it today. It’s been used but not abused on the outside and that’s ok and expected. The one thing on mine is the foam on the side has turned into a dusty mess. I had to rip out all the foam
And hopefully replace it. Other then that it’s a good solid helmet.
Overall Rating
Great Helmet.
Review by ElephantWarrior 11/22/20
Very nice helmet with nice signs of wear
Overall Rating
Great find
Review by Adam 9/5/17
I work for a private security company they require us to buy are own gear. The last few months have had lots of public order problems, so they wanted us to buy riot helmets. 5 other officers bought these helmets and they are great so I got one to. If you are looking for a great helmet that is not expensive, and can take a beating this is it.
Overall Rating
Mickie
Review by Adam 9/2/17
I to work for the same company after Adam got one about 5 of us also bought one. They are great!
Overall Rating
Awsome
Review by Ian 6/12/17
My head is 22.5" around, 9" long and 7" wide. The 58cm-59cm fits perfectly.
Unit matches the picture exactly (save the number): rubber cup in the chin strap (very comfortable), clear visor with rubber seal at the top, black all around and good clearance to the top of your head. The visor tapers in near the bottom for a flush fit to the sides of the helmet.
The visor on mine was a bit loose, but the screws on the side allowed me to tighten it up.
Unseen in the picture, there are meshed holes near the ears for better hearing and a full neck protector (three piece overlapping). There was some scratching (its a riot helmet, what did you expect?), and the visor has seen some abuse, but a quite serviceable unit all the same.