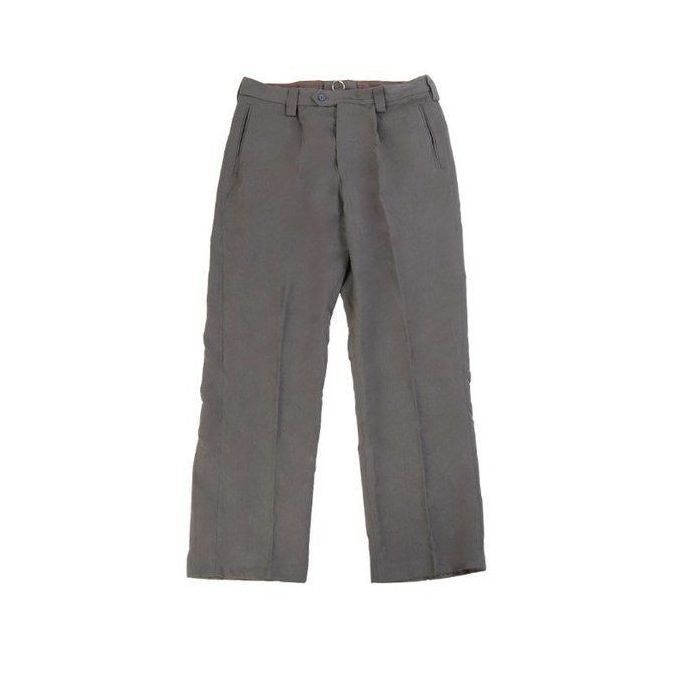 Notify me when this product is in stock
SKU EGAOSP

The East German Army Officer Service Pants are a great looking pair of officer pants from the former East German Army. The East German Army, known as the NVA, had some of the best equipment available to both common enlisted soldiers as well as officers. The uniforms of the NVA tended to be high quality and packed with features that showed the pride that East Germany took in its military force.

Overall Rating
Great Value
Review by Richard 8/22/16
These are very high quality pants. I like the metal rings for my suspenders. Nice soft material. Needed some tailoring but even so they are still a great value. Very pleased.
Overall Rating
Comfy, high waisted pants with a generous cut
Review by Seth 7/9/16
These leave a lot of legroom for the guys with big calves - I don't have that problem but can see this being an asset for many dudes.

Pants are made of a wool/dederon material that is warm a and slightly scratchy. Pair them with longjohns for the ultimate winter hiking setup!
Overall Rating
Great German pants
Review by van 6/14/16
The German army makes very good pants as my looked brand new out of the box. Very soft very soft..oh..said that twice. The metal loops in the seam is very good to tie extra belt straps as my was a little to big in the waist but length was on target. Will hem my up to use in a sci fi battle dress suit that includes a German helmet I purchase here. Guess whick one? May the SOUP be with you.
Overall Rating
E German Army pants ROCK !
Review by ernie 9/24/14
KeepShootin' you're Killin' me.. the credit card keeps coming out for these killer deals.. just opened my latest package.. the East German Officer Pants for $3..?? !! they fit me perfect, size G-52, I'm 180 lbs, 5'10 waist size 34, length 32.. I gotta get some more ..what a deal ! also they are pretty dapper looking and will be a great combo with the French Army Fleece jacket, also a great buy.. it was unused, NEW ! can't beat it...
Overall Rating
Awesome pants but get a bigger size!
Review by Perry 8/22/14
Ordered the pants in size G52, wear a size 36 waist and am 5'10. They were very much too small for me, so I recommend getting them in a bigger size. I gave them to my girlfriend who wears around a 32 mens waist, and they fit her okay. Otherwise, they are a quality pair of East German Army equipment.