The H&K G3 Magazine Combo is a military surplus G3 magazine deal that includes two 20-round aluminum magazines and a first generation two-magazine pouch. These magazines and magazine pouch were used by the German military until the G3 rifle was replaced with the H&K G36. 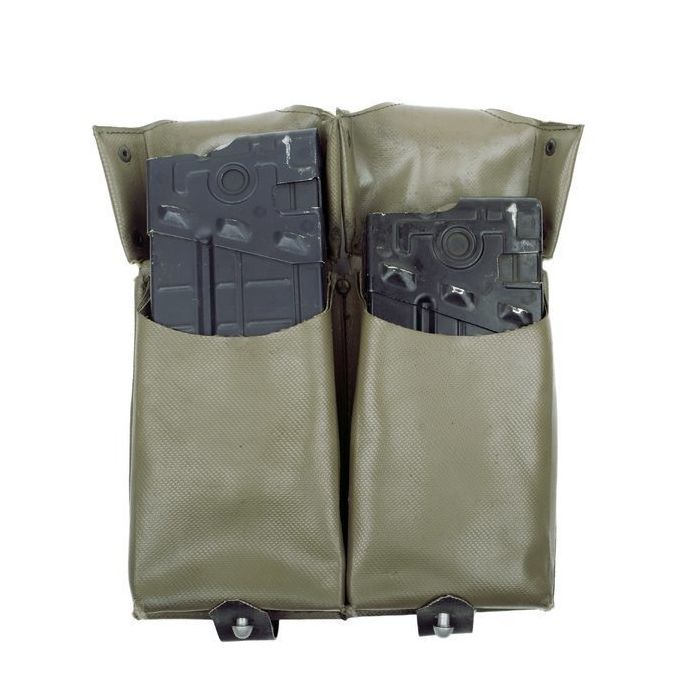 The H&K G3 rifle is by far the rifle that put Heckler & Koch on the map and continues to see services throughout the world. With the long distance stopping power of the 7.62x51 round and the legendary reliability of the H&K roller-locked system, security professionals around the world recognize the G3 for the capabilities it brings to any environment.

With the H&K G3 being replaced as the service rifle of the German Army, there has been a steady supply of both rifle parts and accessories that have come to the secondary surplus markets. Over the past decade we have bought and sold hundreds of thousands of H&K G3 magazines and we have just located another quantity of original German military surplus G3 magazines. We have decided to increase the value of our H&K G3 magazine offering by including two magazines and one of the first generation magazine pouches with each H&K G3 Magazine Combo.

The magazines we are offering as part of this G3 magazine combo deal are all military surplus magazines that came from the German government. You can expect these magazines to look exactly like what they are, 20+ year old used military magazines. This can include surface rust that will clean up with some WD-40 and TLC, colored tape on the magazine body, possible small dents, and areas where there is finish wear. You will however be getting the very last of the original H&K G3 magazines that are available in Germany and there is going to be a point in the very near future where magazines in less-than-perfect condition like these won't be available.

We could spend the time to clean these magazines, sort them, and ensure they match our previously imported containers. Rather than do this and have to increase the price substantially, we've decided to leave this work up to you. You may get two magazines that require nothing more than a wipe down to clean them up, or you may get one or two magazines that have cosmetic dents. Each magazine will come to you within one of the first generation German army G3 magazine pouches, which can also be used to store magazines of similar size like FN/FAL or M14 magazines.

Reviews 97
Write Your Own Review
Only registered users can write reviews. Please Sign in or create an account
Product Questions
Customer Questions
No Questions
Related Products
Check items to add to the cart or
We found other products you might like!
More from German Army Surplus
Copyright © 2002-present United Defense LLC. All rights reserved.