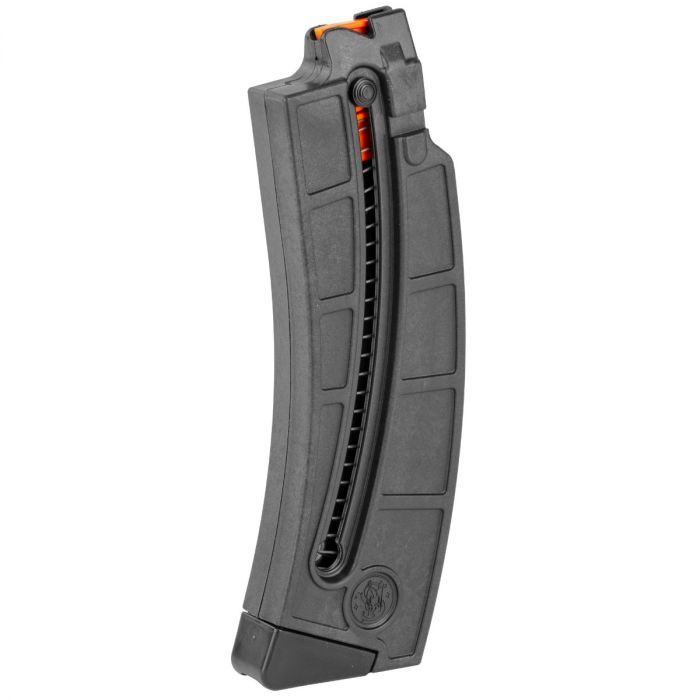 The Smith & Wesson M&P15-22 magazine is an original factory-produced magazine for the M&P15-22. As such, you should expect nothing short of a perfect fit and function. Each 25-round magazine features a polymer construction and an ambidextrous load-assist button.

The Smith & Wesson M&P15-22 is a .22LR variant of the Smith & Wesson M&P15 – the company's take on the AR-15. It is a great choice for those seeking an inexpensive rifle suitable for recreational shooting and small-game hunting. Unlike the M&P15/AR-15, however, the M&P15-22 features an action that operates on blowback rather than a direct impingement gas system. If you have one, you probably already knew that. What you might not know is that you need a bunch of spare magazines – magazines like the Smith & Wesson M&P-22 magazine.

As noted the Smith & Wesson M&P-22 magazine is a magazine produced by Smith & Wesson for the M&P15-22 that is designed to hold 25 rounds of .22LR ammunition. The magazine features a full polymer construction, which removes the possibility for rust or corrosion typically associated with steel-body magazines. It also features a load-assist button, which makes squeezing those last few rounds into the magazine a breeze.

Generally speaking, it is beneficial to seek out factory magazines for your firearms. Factory magazines are manufactured by the same company, to the exact same specifications and tolerances as the originals. They are also made from the same materials, which ensures both fit and function in your firearm.

No accessory is more important to your firearm than a magazine. And because magazines can break, keeping a few spare ones on hand is not a bad idea. Do just that by picking up a few Smith & Wesson M&P15-22 magazines today.

Quality
Price
Value
Good Price
Review by David 3/24/17
I ordered 2 extra for my gun and they work great. Keep Shooting has very good prices.
Quality
Price
Value
As advertised
Review by KP Duty 9/6/16
The two I ordered were definitely S&W factory new as shown in the photo. If you’re looking for a new 15-22 mag go for it.