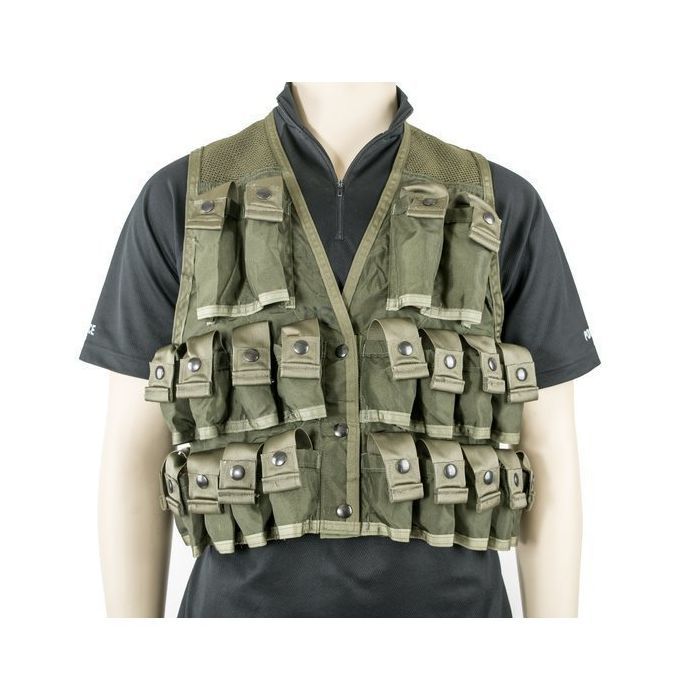 The USGI Grenade Carrying Vest is designed to carry up to 24 grenades for use in the M79 or M203 grenade launchers. With twenty of the twenty-four pockets being designed to hold standard 40mm grenades and the other four capable of carrying the longer 40mm flares.

The USGI Grenade Carrying Vest is an authentic vest from the US military that was fielded during the Vietnam War era. Designed to give a grenadier the capability of carrying sufficient quantities of grenades, this vest is a relic from an era where infantry ruled the battlefield. Now that the role of a grenadier has been reduced, vests like this have been sold for surplus and have been snatched up by consumers who appreciate the versatility of having 24 pockets on a light weight vest.

Each USGI Grenade Carrying Vest is in surplus unissued condition, often described as being "near new" with little to no signs of being used. As we purchased these vests from a third party, we cannot say for certain if they were ever worn so we are selling them as "near new" rather than brand new. We have inspected each vest to ensure there are no defects and found them to be in excellent condition for their age and really only show signs of storage and handling. Size medium fits chests from 39-42 inches and size small fits chests 38 inches and under.