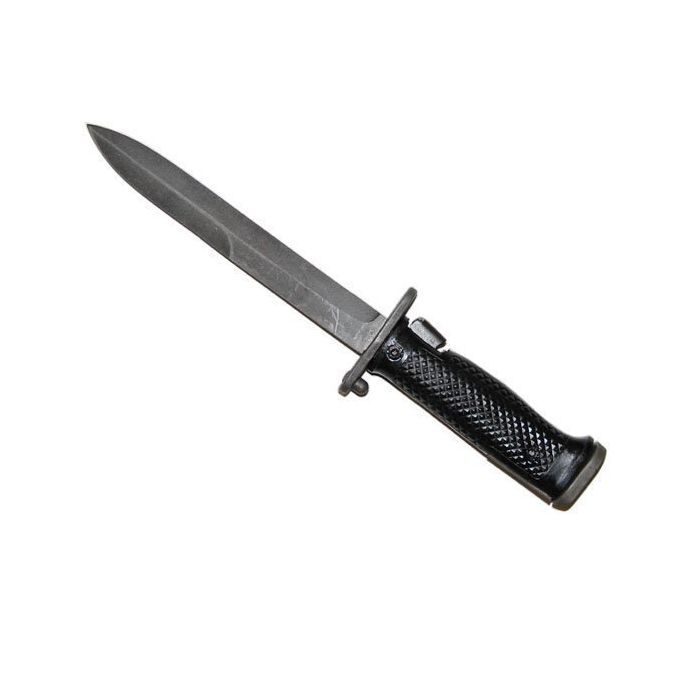 The M5A1 Bayonet was the standard issue bayonet for all US military forces using the M1 Garand rifle. With the M5A1 our soldiers were issued a combat proven bayonet to go with their battle tested M1 Garand. This combination gave our soldiers a winning advantage over the enemy in Korea. Now you can add this authentic USGI M5A1 bayonet to your collection.

Notify me when this product is in stock
SKU M5A1BAY

The M5A1 saw considerable service during the Korean War when it was first issued to soldiers. When the Korean War first began, soldiers were having difficulty mounting the previously issued M1 Garand bayonets while wearing gloves. This need drove the design of the M5A1 bayonet which was a completely new bayonet for the M1 Garand and was quickly praised by soldiers for the performance it provided.

With the addition of the M5A1 the M1 Garand became a complete weapons platform suitable for combat operations of the Korean War. There are many stories from Korean combat veterans of enemy charges where bayonets were used to help stop the advance. The size, length, and weight of the M1 Garand made it very effective as a mounting point for the M5A1 for use when ammunition was low or conditions were more close quarters combat. Now you can add an authentic M5A1 bayonet to your collection and experience first hand shooting an M1 Garand with a bayonet attached.

Overall Rating
Quality bayonet for a good price
Review by TJS 6/11/19
Got a new Garand and was looking around for an M5A1, since I already have longer bayonets for other rifles and - while cool - they can be a little ridiculous. The one I ordered was basically brand new since it likely wasn't issued. On top of that, it mounts securely (albeit with a bit of a wobble), and after shipping this was the cheapest price I could find it at (sorry, Ebay and Gunbroker).
Overall Rating
M5A1
Review by Missileman 3/24/19
The M5A1 was as advertised. While it clearly was an arsenal refinish, it was in great shape. This is the last version of a bayonet for an M1 Garand.
Overall Rating
M5A1 For 1944 Winchester M1 Garand
Review by Michael K 5/9/17
This is the better of the two Bayonets I have for this rifle. Came with a razor sharp edge on the blade and looks the part for this great rifle. I love it.
Overall Rating
Great look to my win. Garand
Review by Walter 9/9/12
AS DESCRIBED FAST SHIPPING , GREAT DEAL
Overall Rating
VERY NICE
Review by Walter 9/9/12
AS DESCRIBED, FAST SHIPPING, GREAT TO DO BUSINESS WITH, WILL BUY MORE!
Overall Rating
looks good on Korean era Garand
Review by henry 7/21/12
Stamped U.S. M5A1 MIL PAR COL. Not an expert but seems to be Government issue, though grip panels not fitted as well my M6 Imperial contract bayonet.