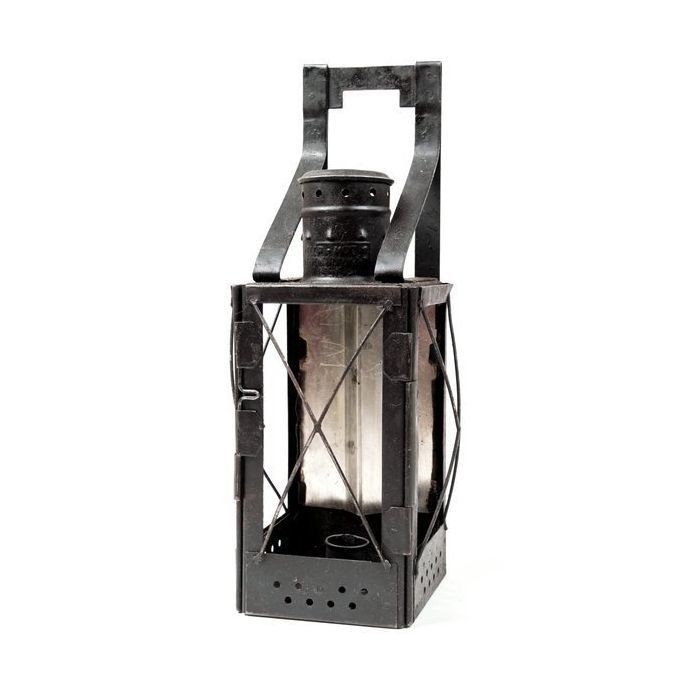 The USSR Soviet Train Conductor Lantern is an authentic antique lantern from the former Soviet Union Railway. These lanterns were utilized by train conductors who carried them prior to the Soviet trains having electricity inside. Marked CCCP along with the factory name and year of production, these candle lanterns are perfect to use as intended or mount them on a wall for decoration.

The USSR Soviet Train Conductor Lantern is immediately recognized as an antique candlestick lantern. These lanterns were used throughout the USSR Soviet Railway system which was not electrified at the time these lanterns were in use. Conductors would place a candle inside of this lantern which would then be lit, giving them a portable light source to use while working on and moving inside of the train. Like most Soviet designed items there is an industrial artistry quality to the lantern that is immediately appreciated once you see one. The design makes it easy to mount the lantern to a wall where it will surely provide your home with an antique that is both practical and affordable to personalize your space with.

Overall Rating
Not such a good deal
Review by Mike 7/20/18
Does not have lenses. Now I'll have to spend more for special glass.
Overall Rating
Nice But No Glass Lenses
Review by knickerbockerflat 7/17/18
The picture and description make you think that the lantern is complete with the glass or mica lenses that the unit is built to have. No lenses. I'll have to take it to a glass shop and spend even more money. Wish the description had warned of this. Would have been five stars if the lantern had been complete.
Overall Rating
No lenses
Review by Bill 7/16/18
Listing led me to think that this lantern had glass lenses. It came without them, though it is clearly made for lenses.