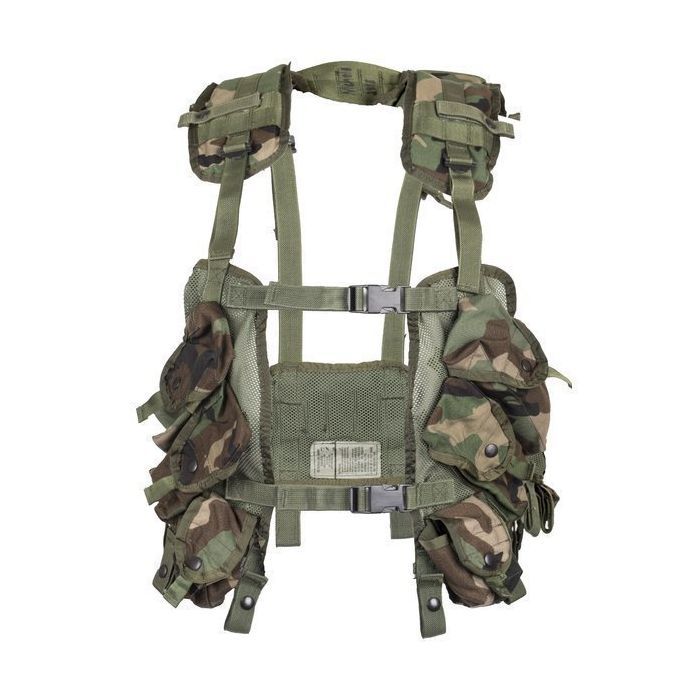 The US Military Enhanced Tactical Load Being Vest is an authentic US military tactical vest. This vest was first fielded in 1988 and is designed to be a one-size-fits-most vest. There are a total of six integrated pockets on the vest which are designed to carry six 30-round M-16 magazines and two fragmentation grenades.

The US Military Enhanced Tactical Load Bearing Vest is an integral part of the Individual Integrated Fighting System. This vest marked the time that the US military issued a load bearing vest which quickly became the new standard for modern fighting forces. With this vest integrating pockets for carrying six 30-round magazines and two fragmentation grenades soldiers immediately recognized the high performance design when compared to the ALICE system that this fighting system replaced.

This tactical vest is the enhanced version which is considered to be the second generation of the original design. This enhanced vest features mesh backing which provided better cooling support for soldiers when wearing this vest in hot climates. The fully adjustable for size aspects of this vest also gave soldiers the ability to wear their combat gear as tight to their body as they needed or to wear it loose when conditions warranted it.

Overall Rating
Holds 4 30 ROUND AK mags too
Review by TexLaw 4/8/17
I use my AK47 instead of an AR. The four magazine pouches have a flap to cover the mag once in the slot. I took this on a hike at my ranch. I had my AK with a loaded drum. So I packed one 30 round mag, a large heavyduty flash light, and a large hunting knife in its sheath. Each fit securely in the mag slots. The flap cover have velchro and a button snap to close the slot. With the 30 round AK mag, the flap fits over enough to use the velchro but not enough to snap it shut with the button (the snap touches, but is a wee bit short to close- a twenty round AK mag would fit fine). Either way I lost none of the items on the hike I took. I am over 6'2" with a 50 inch chest and broad shoulders and this vest fit just fine. It would also fit a much smaller feller too with all the possible adjustments you can do to the straps. This also helps with posture. I haven't thought of a use for the grenade pouches yet. The padding is some kind of nice gel type material. I think this could sell for more than 15usd.